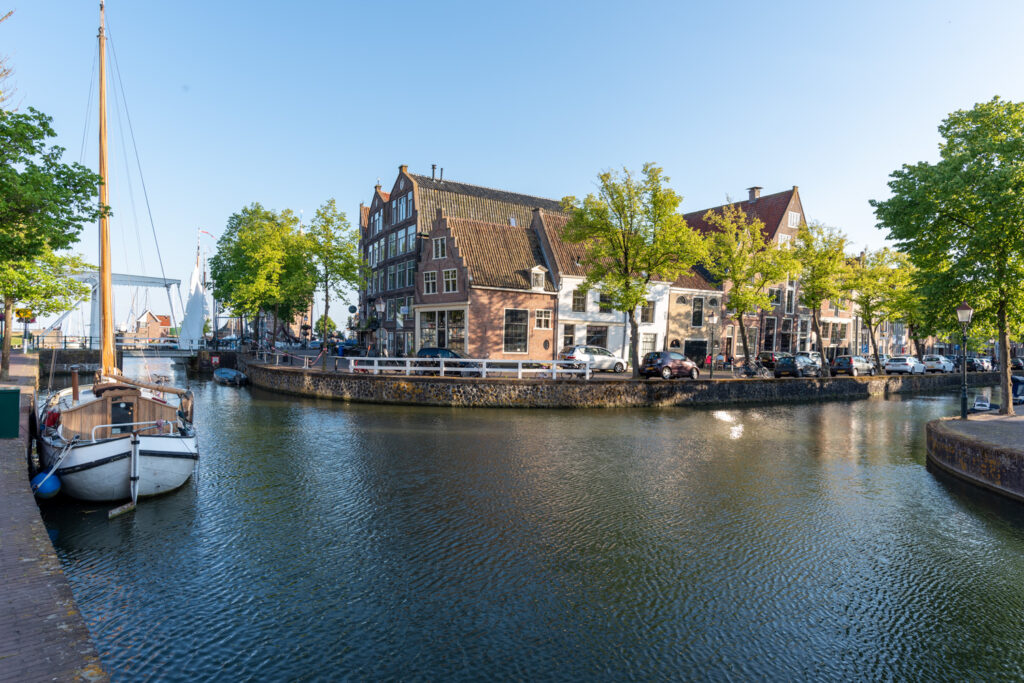 We moved to Amsterdam over a year ago. Because of my job and also because last year we have been on holiday in Turkey and in Canada to visit Daniel’s parents and in Bucharest to visit my parents, the plan was to enjoy the Netherlands starting with the autumn of 2019.

But the fall and winter were very rainy and cloudy. February was the wettest month in the Netherlands since they began measuring it, in 1901.

And when spring came, the pandemic was well underway. 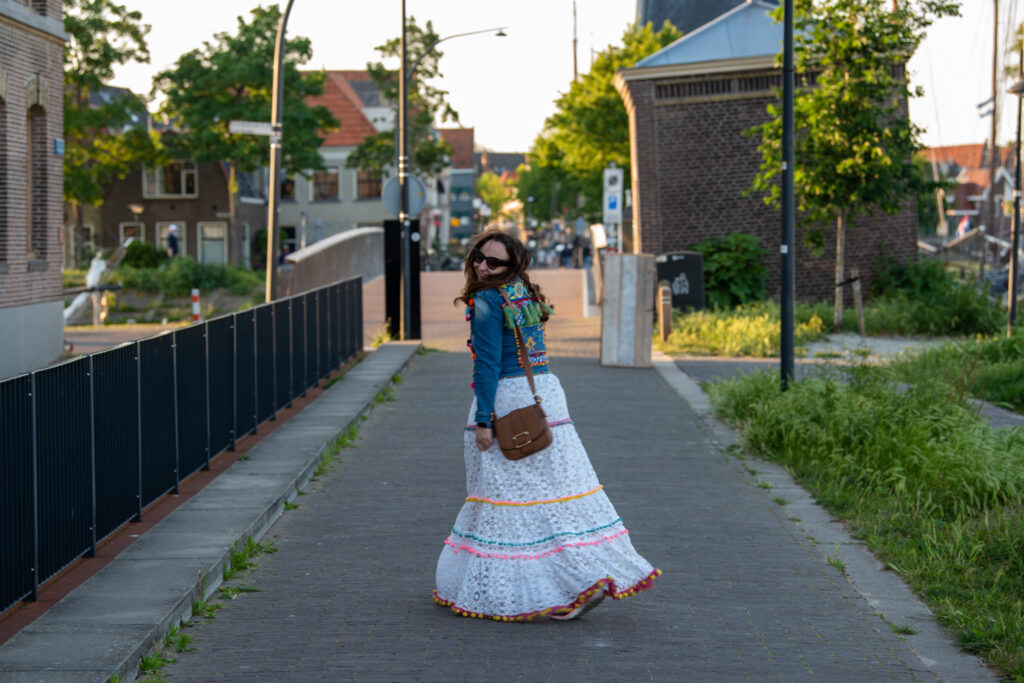 The measures to combat COVID-19 in Amsterdam are very relaxed. We chose to isolate ourselves for two months, starting in March. And in May we started to venture out, on foot and by bike and even went to terraces for coffee.

In addition, because The Netherlands has many small and chic towns, some of which are not so well known to non-Dutch people, we started to do some research.

My favourite (right now) is Hoorn. 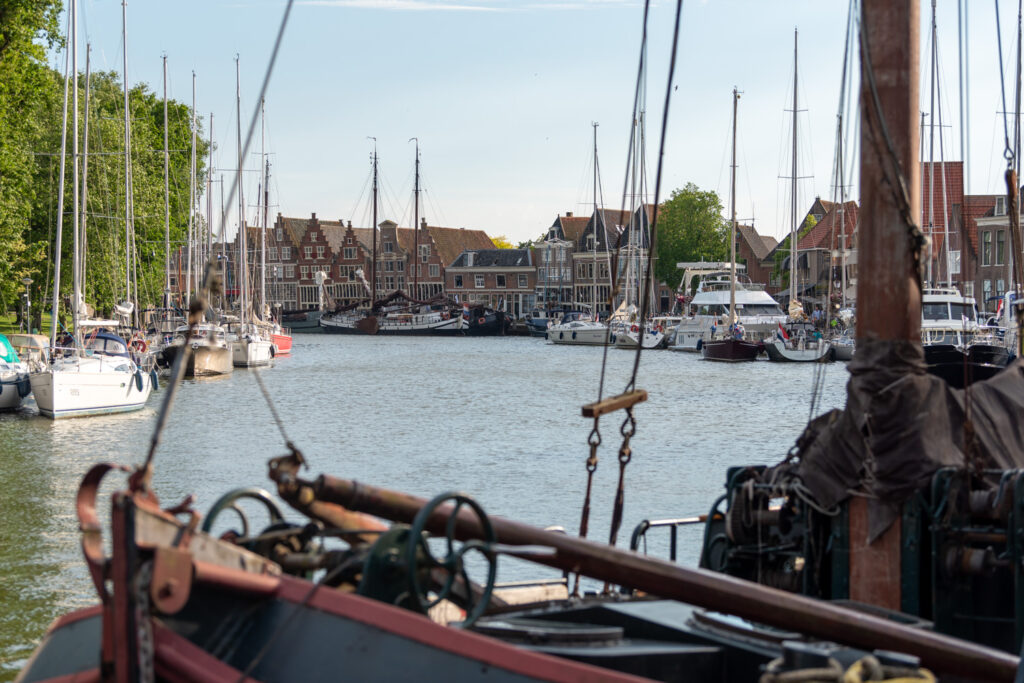 Hoorn is a rich city, and was an important center for the Dutch East India Company. It is located 22 km from Amsterdam and is located on the shores of Lake IJsselmeer. The lake is very large and has several beaches, and also has an impressive harbour.

That is why Hoorn, during the “Golden Age” in the Netherlands, represented an important trade reference point. Exotic spices (such as pepper), teas, fabrics, decorations and more, were imported here.

Hoorn has kept its historical appearance and you can find preserved houses with authentic seventeenth-century architecture.

The first time we arrived in this city, the shop, the terraces, the restaurants were closed.

But there were hundreds if not thousands of boats and personal yachts. As far as the eye could see. Parked side by side in parallel. And everyone was eating dinner on deck, talking to their neighbours on other ship, clinking glasses and even organizing parties (while respecting the social distance). 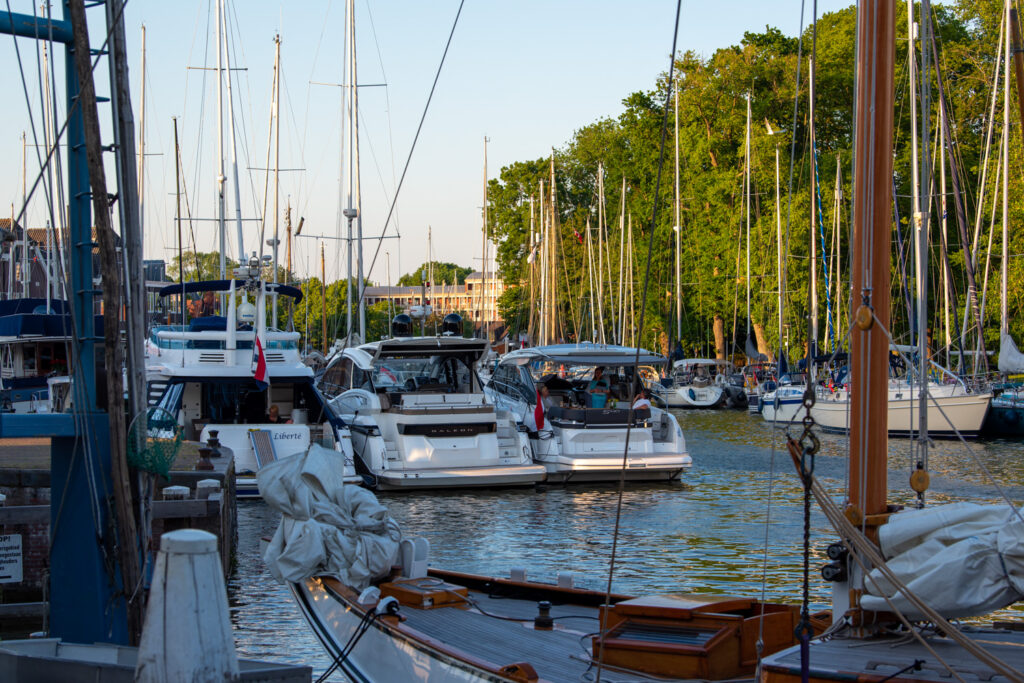 We started walking on the lakeshore; a long walk. There are benches where you can sit and admire the sunset.

Then we started walking towards the center, making stops every two minutes so that Daniel can take a picture of a building, a beautiful balcony (with a view over the lake), a small street that reminded us of Italy (and of course – of me). 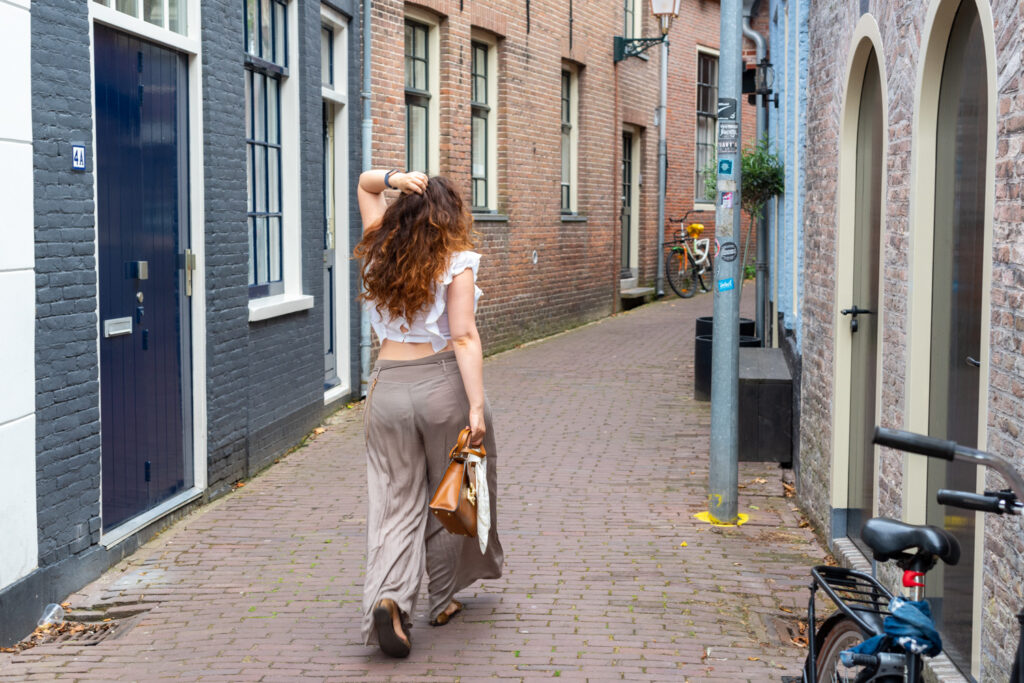 We passed the church Koepelkerk that has a very beautiful architectural style (but that we found closed every time we visited Hoorn).

We arrived in the central square, where you can find the beautiful Westfries Regional History Museum. The building and its gate are impressive and they show the historical richness of this city. 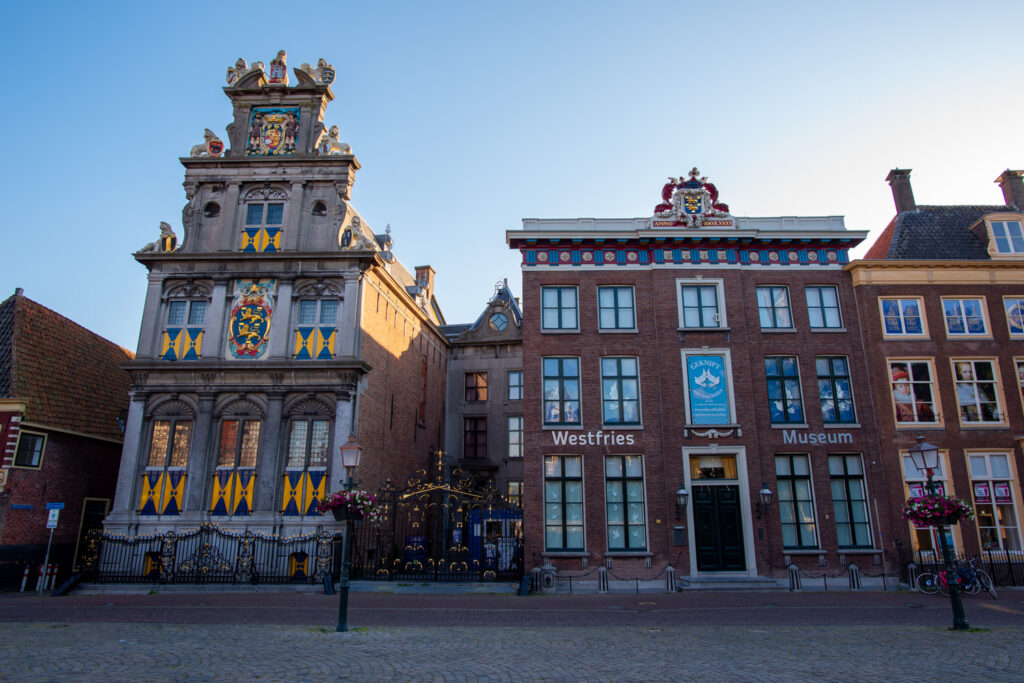 In the center of the city, now that the terraces have finally opened, there is an indescribable joy. Each table is occupied by people that are drinking beer, wine and very rarely water. My favourite coffee place is Restaurant d’Oude Waegh. What made me enjoy this place is the beautiful old building and the wonderful chandeliers. Yes, I’m fascinated by chandeliers. I’ll have one at some point. 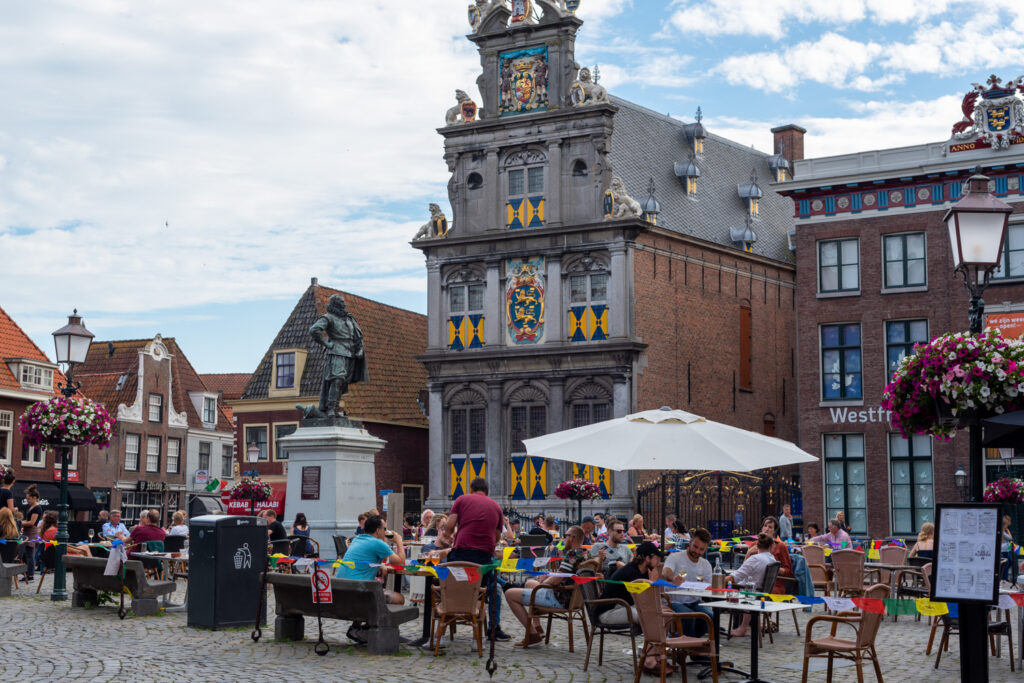 Then we walked to the harbour. There are several alleys that lead there. We probably walked on each one of them. The distances are small and at every corner you discover a terrace, a canal, a bridge, a beautiful balcony. So even though we had the plan of what we were going to do in Hoorn, we decided just to walk wherever the road was taking us. And the decision was very good. Because every time when we were walking in Hoorn, a new undiscovered wonder would show up in front of us. 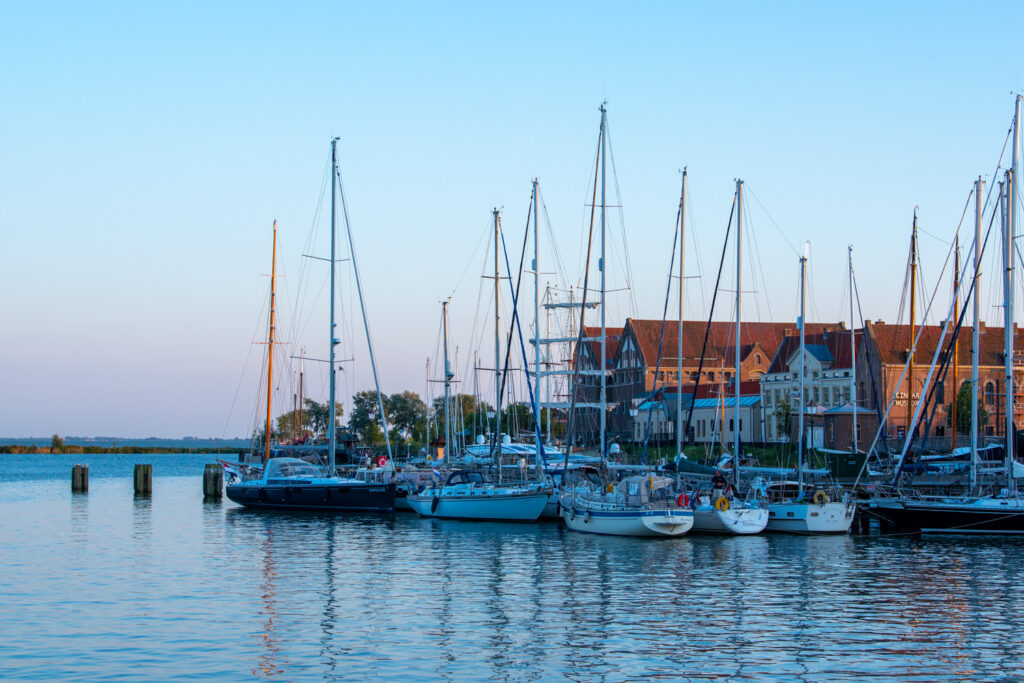 What I liked is that almost every house had in at least at one of the windows, a teddy bear (or even two, to have company). I have never seen this in any other Dutch town and it seems to me a very sweet and welcoming idea.

Because I love the water and the sea (Lake IJsselmeer is close to the sea – and with access to it), my favourite part of the city is its port.

For the first time we were very determined to visit Halve Maen, a ship that belonged to the Dutch East India Company. The ship anchored in New York for the first time in 1609 (impressive!!!). The English captain, Henry Hudson, was commissioned by the Dutch people to secretly find a western route to China.

As a gift commemorating 300 years from the first voyage of the Halve Maen, to the United States, The Netherlands made a replica of a vessel in 1909. The new boat burned 30 years later and the Dutch produced another in 1989.

I was so glad I could visit Harve Maen. So we went directly to the spot where it was supposed to be. But it wasn’t there anymore. It was sent back to New York.

We continued our tour of the city and we saw the water tower. It is now a famous Hoofdtoren restaurant. The menu here is based on seafood (and not only). 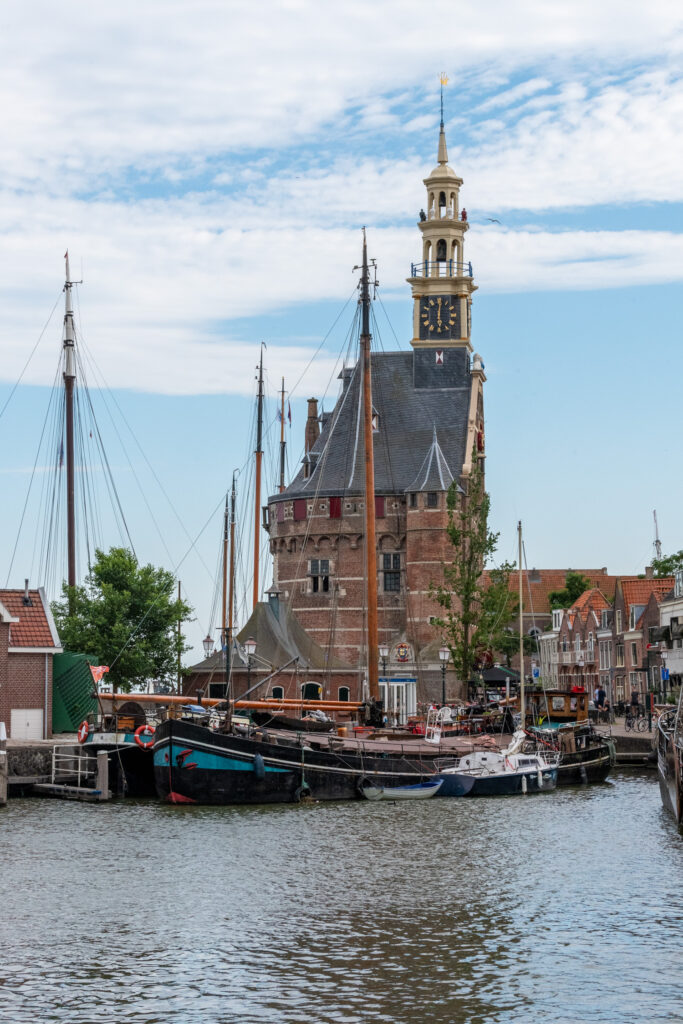 Everywhere you look, you can find dozens of other yachts, big or small. But not only. Many fishing boats, which are replicas of those of the fishermen of Hoorn in the seventeenth century and later, anchor in the famous port. To the delight of tourists, some of them can be visited. 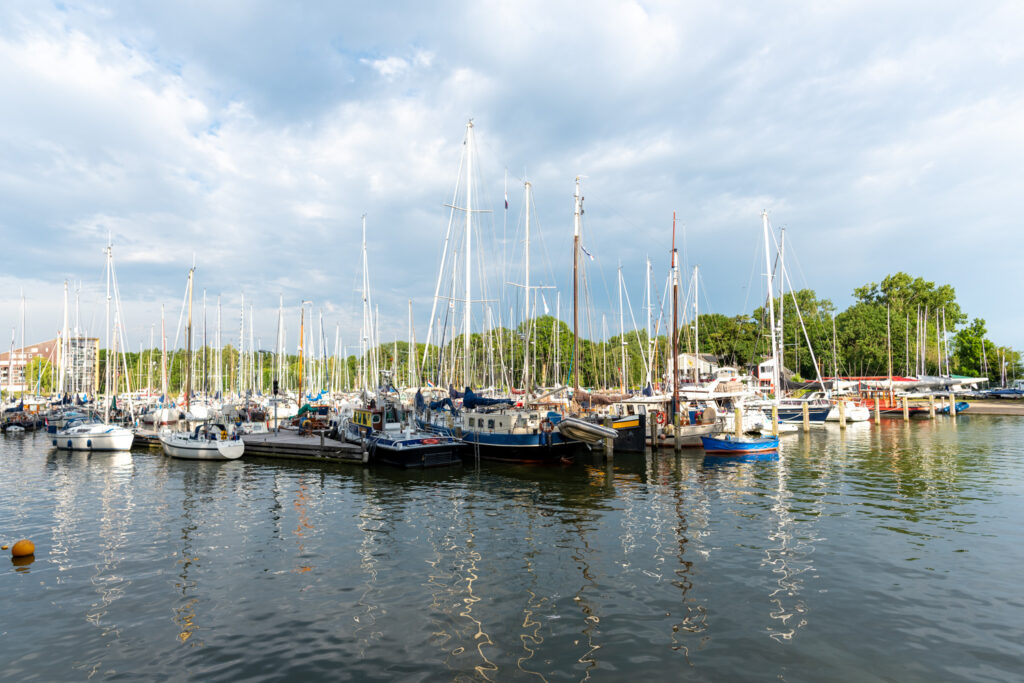 You can also walk on an island that is surrounded by mooring docks for yachts. And which, on one side, supports a lock. The fact that you can look out over the lake like a sailor ready to leave the harbour and turn back on one leg and see the most beautiful bridge in the city makes Hoorn one of my favourite places.

And sitting there and enjoying the sunset, the sound of small waves crashing against the lock wall and the electric motors of the boats returning to port, I saw a restaurant with tables right on the shore.

As it was already dinner time, we hurried to try to find a table. The Dutch are very strict with their dinner time, so everyone shows up for their reservations at 19:00. We were lucky that there were two seats left for us.

The restaurant is called De Kade Hoorn and is has a not-so-large menu, but has something for all tastes. I ordered a tomato soup which actually turned out to be some kind of spaghetti al pomodoro (but very very good). So I wasn’t upset. Of course, as it was pasta, I shared the “soup” with Daniel.

And for the second course, I had mussels. They were very good and very fresh.

For coffee, we ordered an apple pie. Which was the best apple pie I’ve ever eaten. And the coffee was perfect. I recommend this restaurant.

There are many other restaurants and cafes worth trying. We will certainly return to enjoy this enchanting place of Holland that we, at least, had never heard of before.

And after dinner (as we usually do), we went for another walk. And Hoorn at sunset and even at night is maybe even more beautiful. The lights reflected in the calm water were now so relaxing. As almost all the boats are anchored, and their passengers had finished dinner (many of them order at the restaurants on the edge, both food and wine), everyone is in the city center to drink coffee, beer or eat dessert. So, the canal water seems to enjoy the moonlight, hitting relaxed on the parked vessels. It’s a beauty. 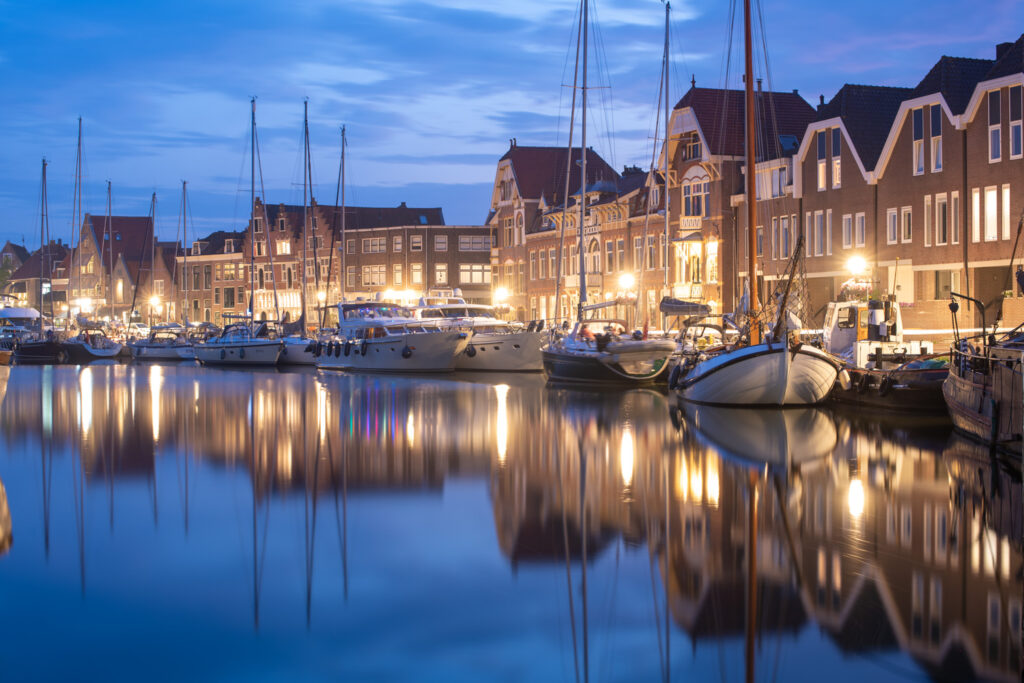 When you come to the Netherlands and have more than a few days to visit, I would advise you not to stay only in Amsterdam. Although the capital is beautiful and you can’t get bored visiting it, the cities (Gouda, The Hague, Maastricht, Utrecht, Rotterdam or Haarlem) and the towns (Hoorn, Giethoorn, Marken, Alkmaar, Volendam and many others) are also a must. So don’t hesitate and, for when it will be possible to travel (safely), put the Netherlands on the list! 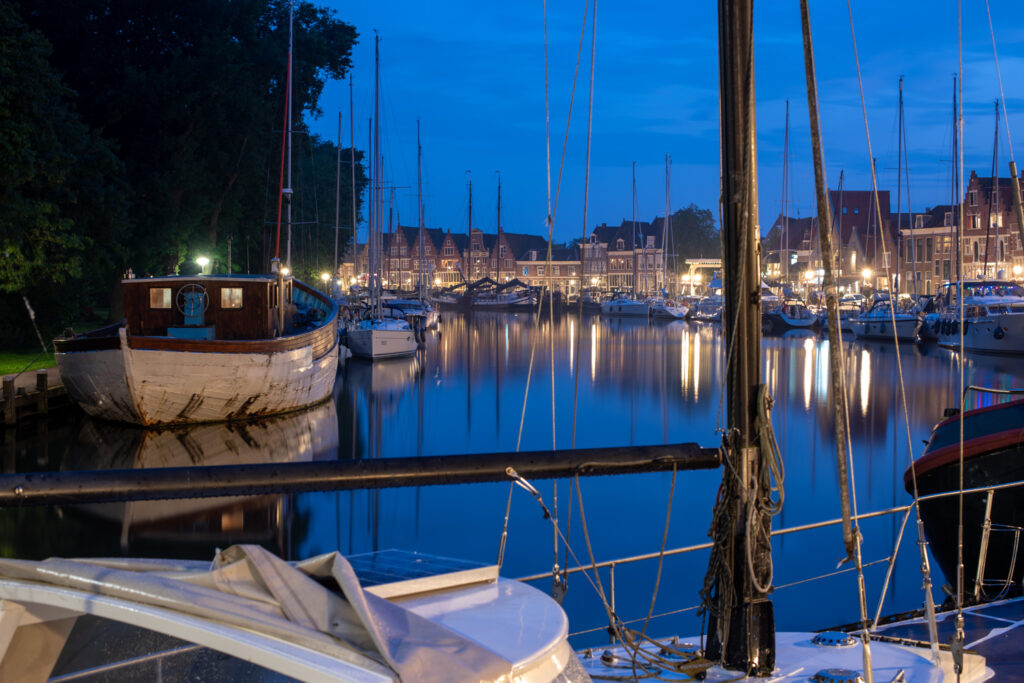