I would go to Florence every weekend, if I could.

It’s a charming city where every street corner is overflowing with beauty.

Every year, on Daniel’s birthday, we go somewhere in Italy (his father is Italian so his blood calls him). And we love Italy. Two years in a row we went to Lake Como and last year to Florence.

We were scheduled to take off on Friday at 7 p.m. from Amsterdam, with Vueling. But the plane left with a 7-hour delay.

We stayed in Schiphol for a while (it was not known exactly when the plane would arrive from Florence and when he would eventually be able to take off). Schiphol Airport is not very friendly for overnight stays. The lounges are open until 10 p.m. at the latest and the restaurants and cafés close between 8 and 10 p.m. The only late night option is Starbucks. None of the shops are open either.

We wandered around the airport, trying to find something to do and as the plane had not even taken off from Florence at around 10 p.m. we decided to go home (we do not live very far from the airport), with an Uber.

I received a message at around 11 p.m. that we had to be at the airport at half past midnight so after about two hours at home, we took the Uber to the airport again.

We landed in Florence at around 5 in the morning, took a taxi and went to the hotel. Our hotel was very central, with a direct view of the cathedral. The view was wonderful. The hotel is called Hotel Duomo Firenze.

It is not very luxurious, but the view from the room (you have to pay extra for it), the breakfast terrace and the location, made it the perfect choice. The entrance is directly from the street and the reception is on the third floor. The elevator is very small, so if you go there for a longer period and take a lot of luggage, you may have to send the elevator upstairs with only your luggage. 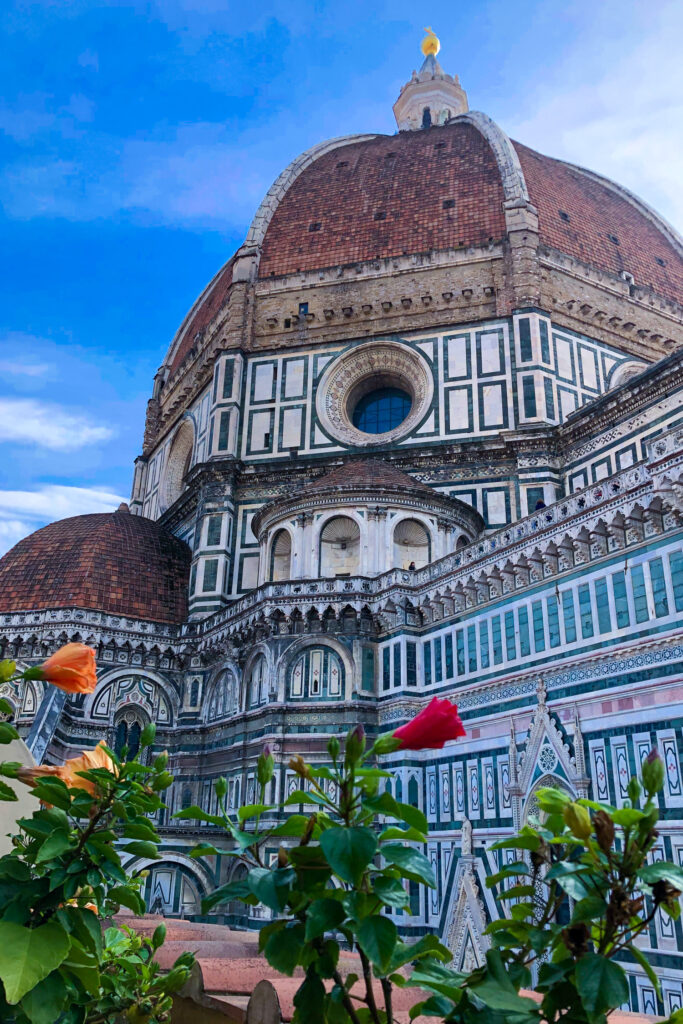 The hotel is scattered in several buildings and you will also have to go up and down with luggage in hand. Poor Daniel …

In the morning (not very early in the morning because we went to bed at around 6.00) we opened the blinds and what we saw took our breath away: the walls and towers of the cathedral, with its distinct bright marble, surrounded by a bright and warm October sun. In addition, there were hundreds of people queuing to enter the Dome or buying gelato from the downstairs bar. So much happiness! 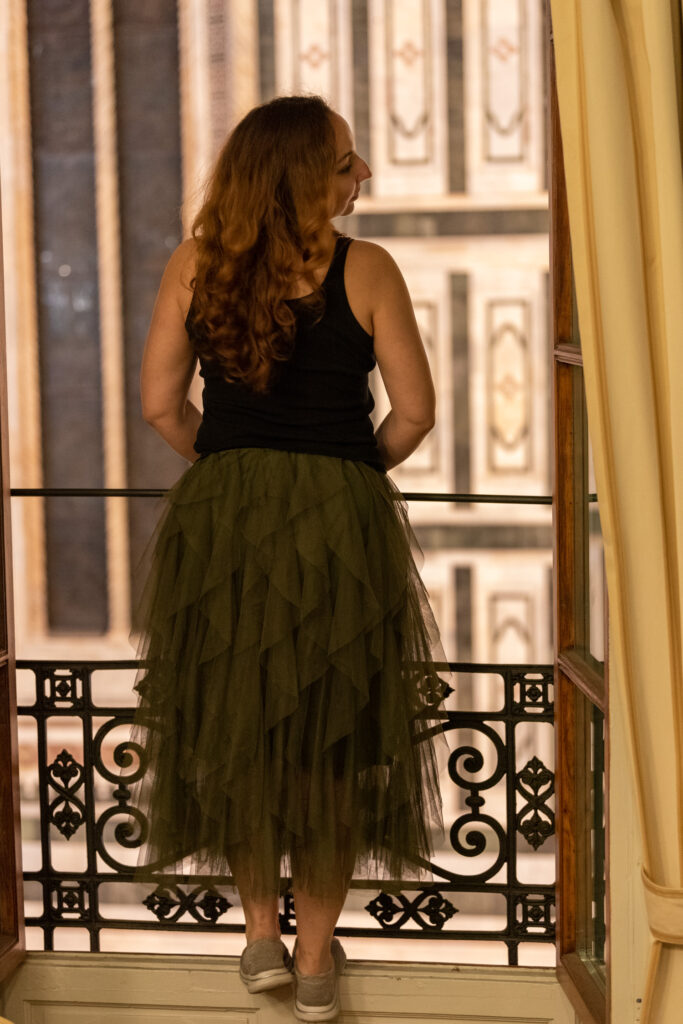 I needed a coffee on Saturday morning. Italian coffee, ie espresso. The best coffee is in Italy. And believe me, it could be seen on my face how much I needed it. Daniel really felt the need to capture my mood. 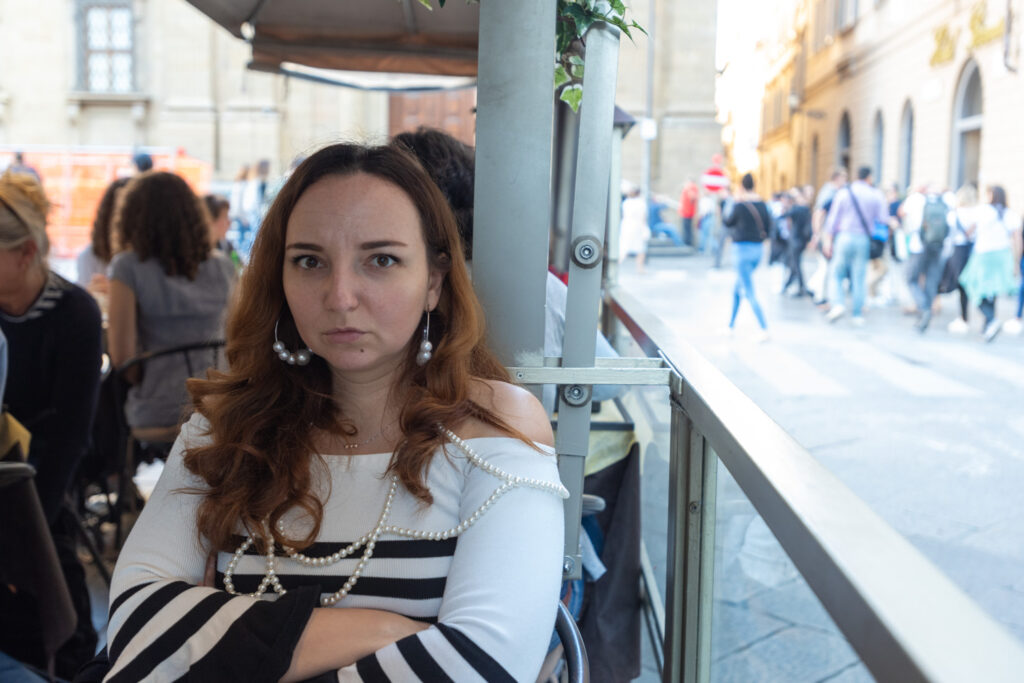 After I managed to find the perfect bar to enjoy my coffee, namely Caffe San Firenze, a cafe from 1920, with a high ceiling, chandelier and old furniture, I walked through the city. 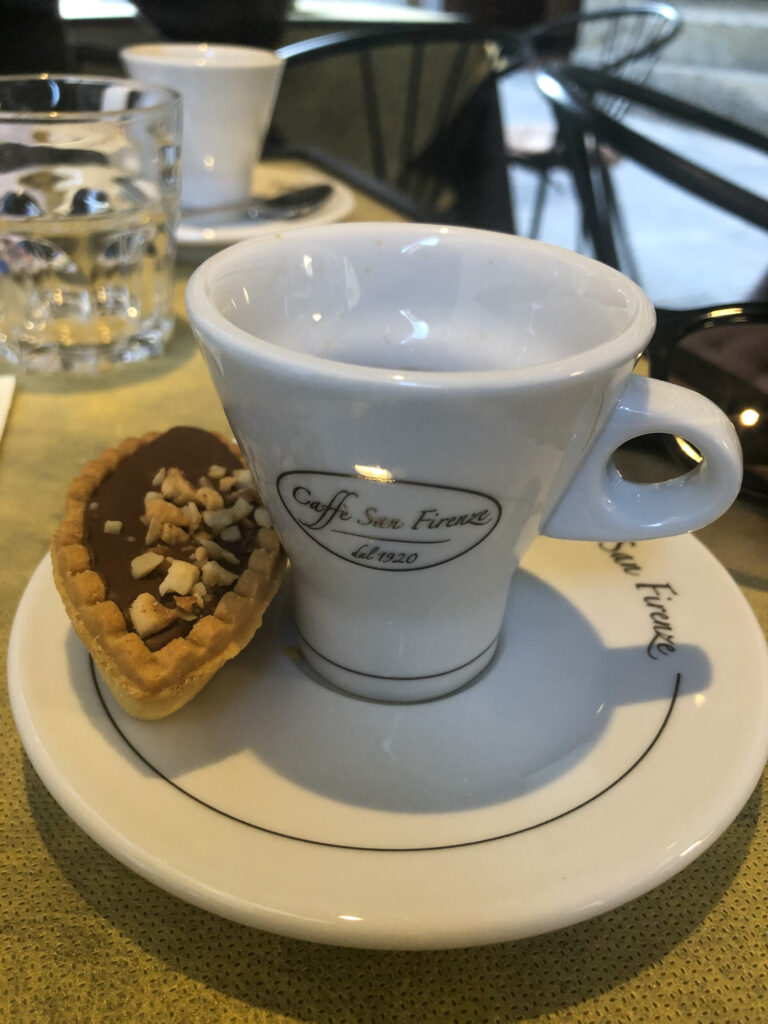 I saw the Statue of David in Piazza della Signoria (one of the two replicas of the statue of Michelangelo in Florence). The original statue, sculpted in a white Carrara marble block, was relocated from the square to the Galleria dell’Accademia in order to be preserved. And the second one is in Piazzale Michelangelo. 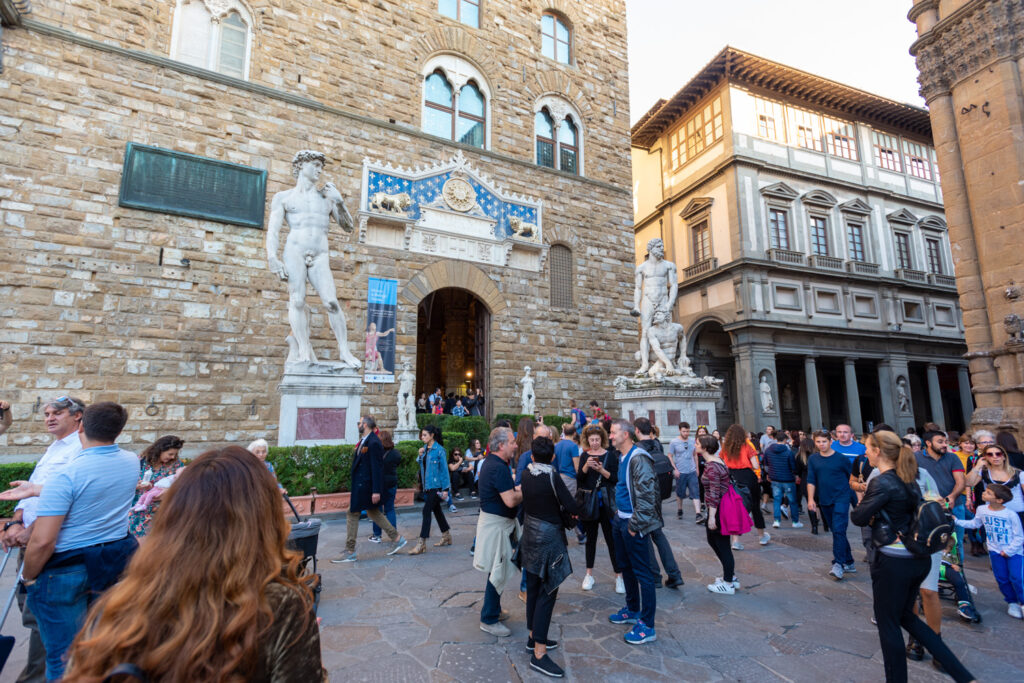 There are many other replicas in the world, in New York, Marseille, London or Kentucky.

We also visited the Palazzo Vecchio, which is the city hall. But it’s not just that: inside are frescoes, various art objects that you can admire at will and especially the famous Salone dei Cinquecento. Reminiscences of the works of Michelangelo and Da Vinci can be found here. 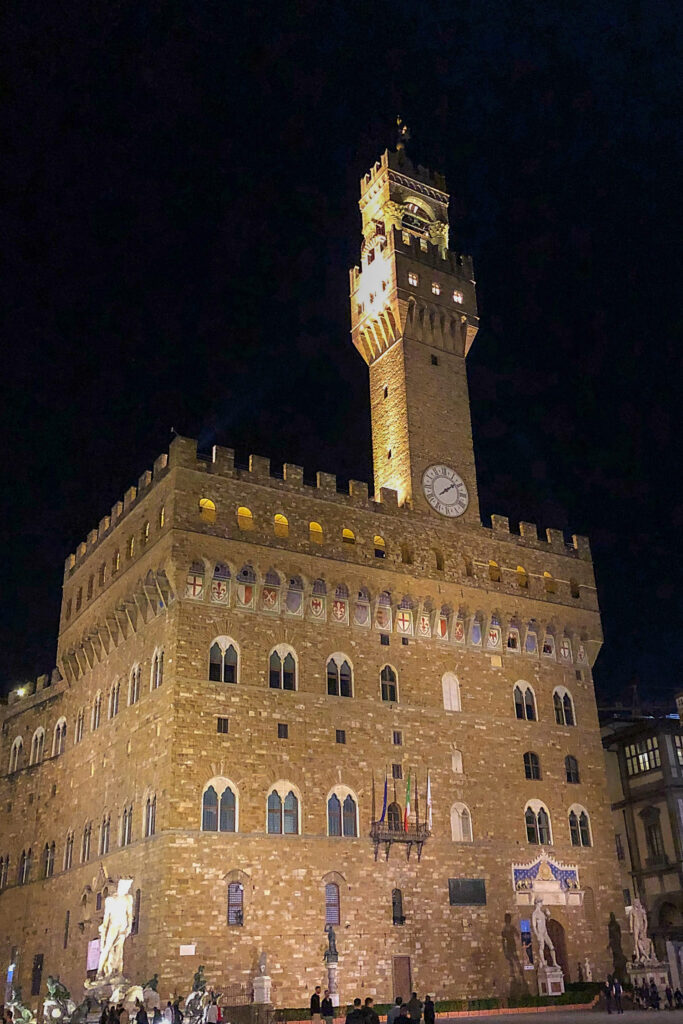 Then we took an easy walk to a pizzeria I had booked about two weeks before. Being Daniel’s birthday, I had reserved most everything in advance, to be sure that everything would be to his liking.

Pizzeria Santarpia is not very central but I must admit that I ate one of the best pizzas there. And most importantly, so did Daniel. And let’s not forget: the house wine, Rosso di Montalcino, was just right. 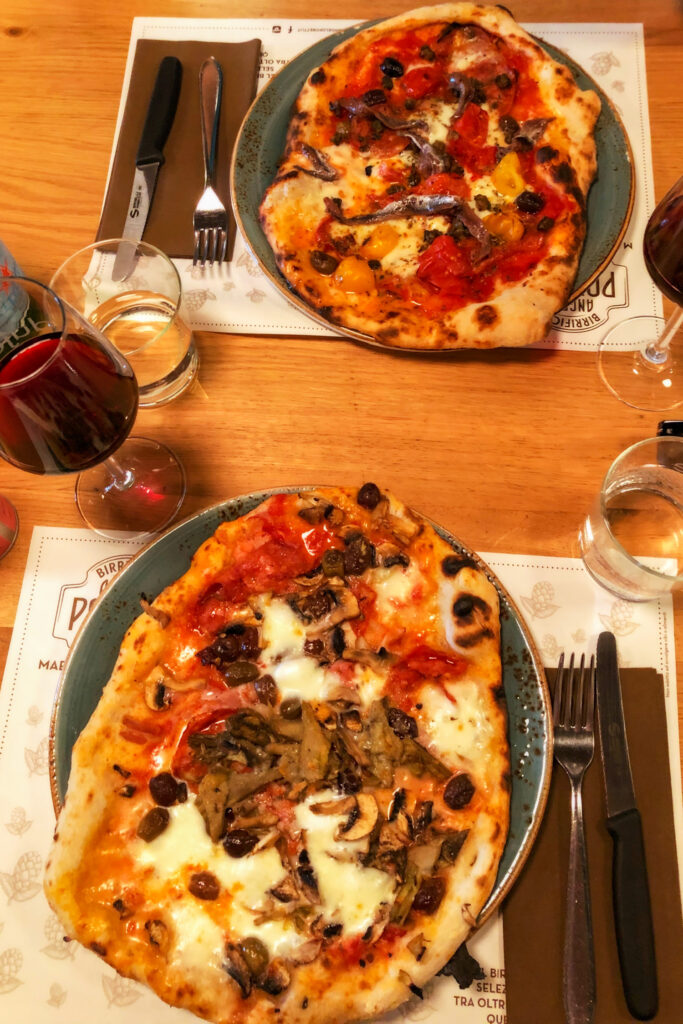 Then we went again for a long walk, without any specific destination, only appreciating the Renaissance beauties of the city of Florence. It was hot and sunny, a real joy to be there. 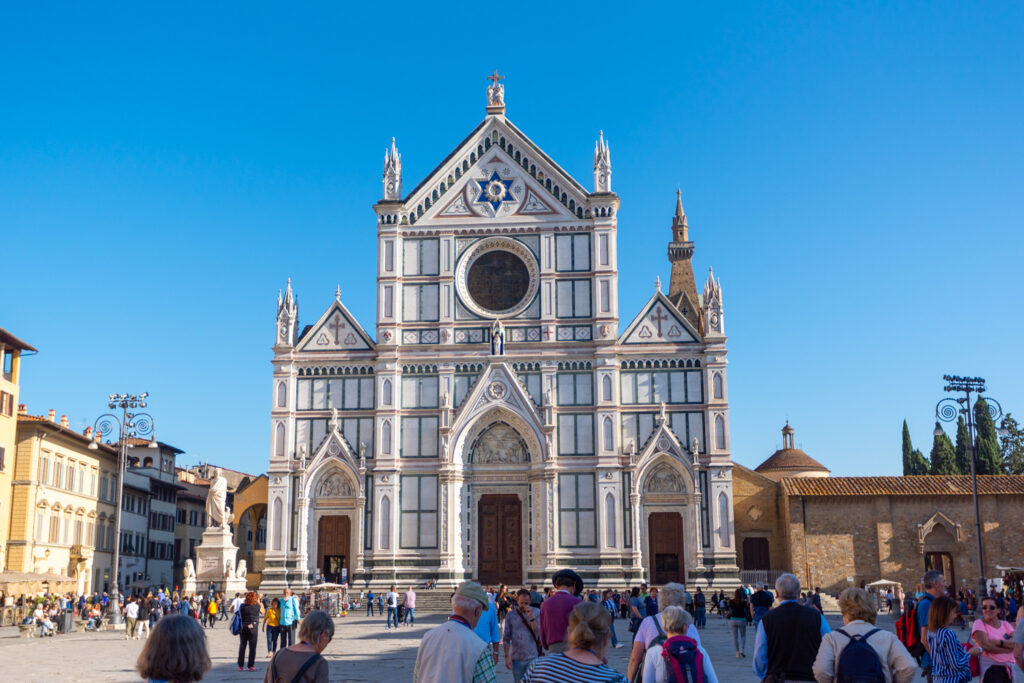 We also visited the Basilica di Santa Croce, the most important church in Florence and the largest Franciscan church in the world. This church, built in the austere Franciscan style, is where Michelangelo, Machiavelli, Galileo, Meucci (he or Bell discovered the phone, it is still disputed), Rossini or Enrico Fermi (the father of the atomic age) have their graves. And the garden is also impressive. 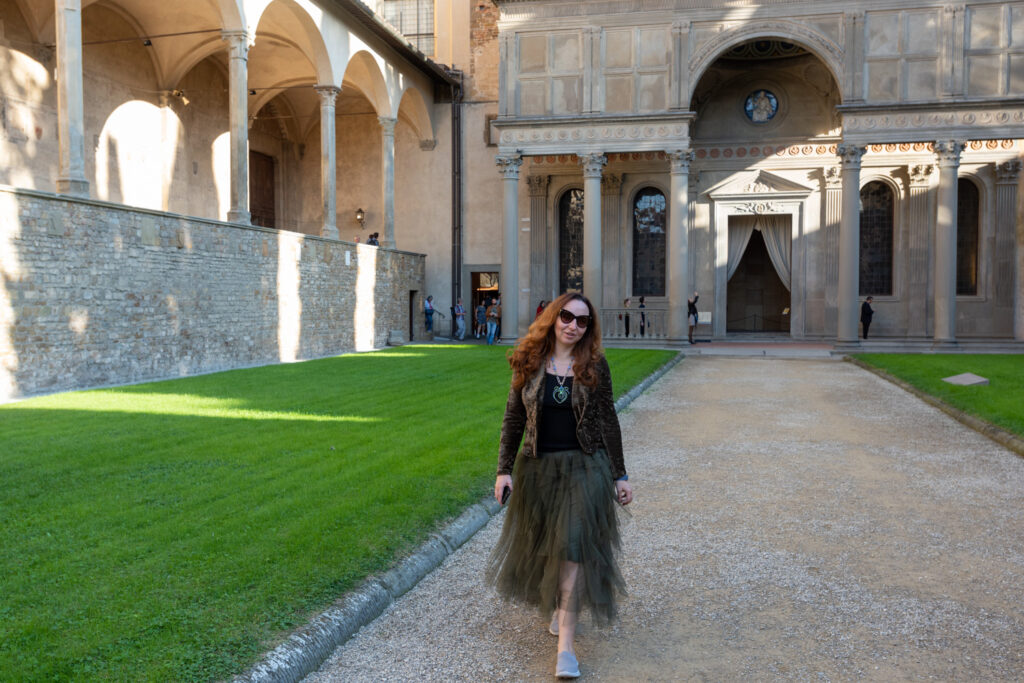 Arriving in the center again, we went to eat a cake at Gucci Garden. This, placed in a 14th century building is actually the Gucci Museum. The luxury brand founded in 1921 exhibits on two floors clothes, accessories and of course a selfie wall, with the classic G monogrammed. I was delighted with what I discovered there. And they also have a store where you can buy office items, plates and trays, clothes and accessories and even views.

Also here, on the ground floor is Gucci Osteria where the chef (and the owner of the restaurant) is the very well known Massimo Bottura, one of the best chefs in the world. I called before we arrived in Florence to make a reservation and they told me on the phone that it was the off-season and there was no need. I was very disappointed to find out when I got there that, although the restaurant was empty, it could not receive us without a reservation. But we’ll go next time.

A little disappointed that we couldn’t go to Gucci Osteria but also happy because it means we have to go back for this reason, we chose to have an aperitif at Gilli, a cafe restaurant that is very close to the cathedral. We sat at a table overlooking the famous carousel, looking at the world, relaxing and being grateful for the moment we were living. 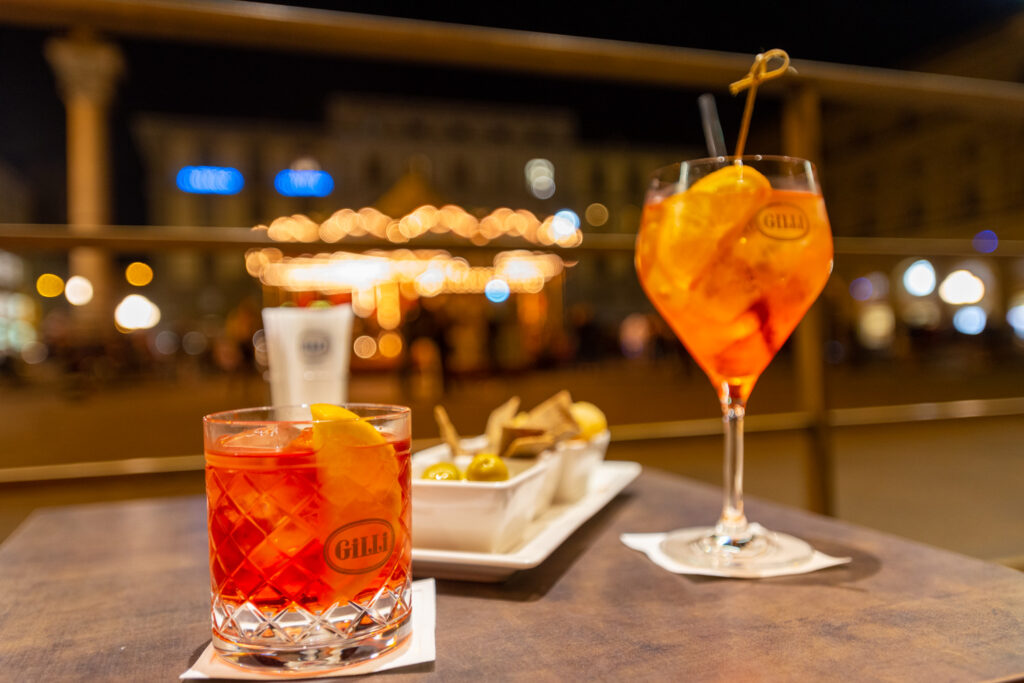 Realizing it was late, we hurried to the hotel to change for dinner. Great advantage that the hotel was in the center and we had time to prepare for what was to come. Namely the reservation at the Cantinetta Antinori Restaurant, in Palazzo Antinori, one of the most beautiful examples of Florentine architecture from the 14th century. 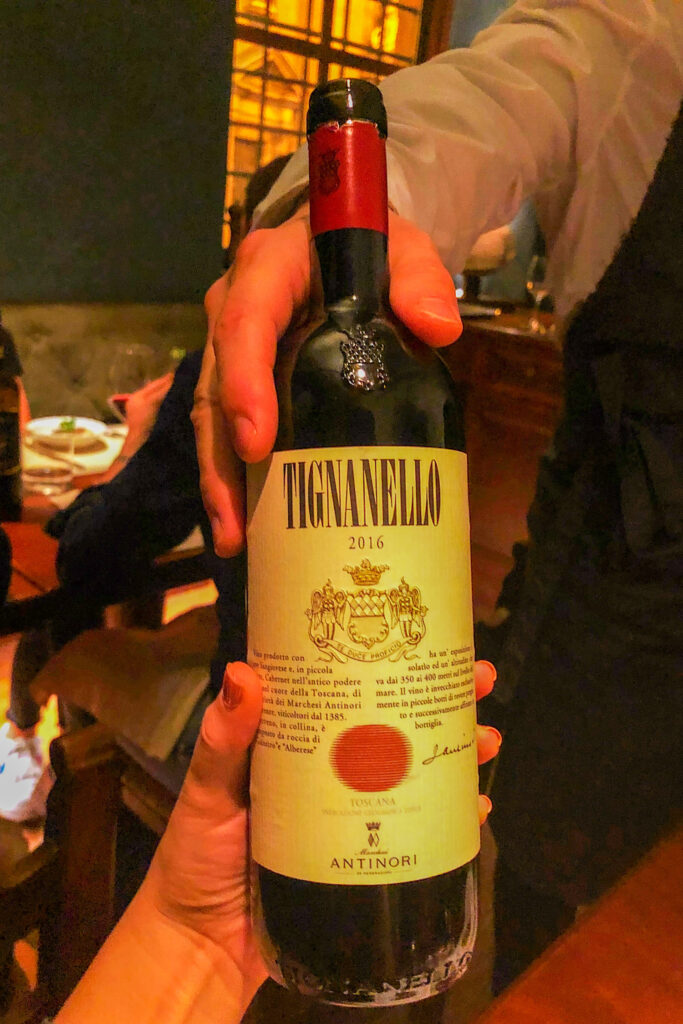 The restaurant is elegant, very elegant, classic, with impeccable service, with a small number of meals and a Tuscan menu. Although the food was very good, our memory there is that we ordered a bottle of Tignanello from 2016.

At midnight I was at the hotel and as it was already October 27, I opened the bottle of champagne that I brought with me, as a surprise for Daniel.

The next day we went to visit the Uffizi Galleries, one of the most famous museums in the world. The entire art collection of Casa Medici was donated to the museum, so you can get lost in the wonderful palace for hours. The birth of Venus or La Fortezza by Botticelli, Bachus or La Medusa by Caravaggio, works by Michelangelo, Da Vinci, Raphael, Montefeltro reside here. We spent many, many hours in the museum. 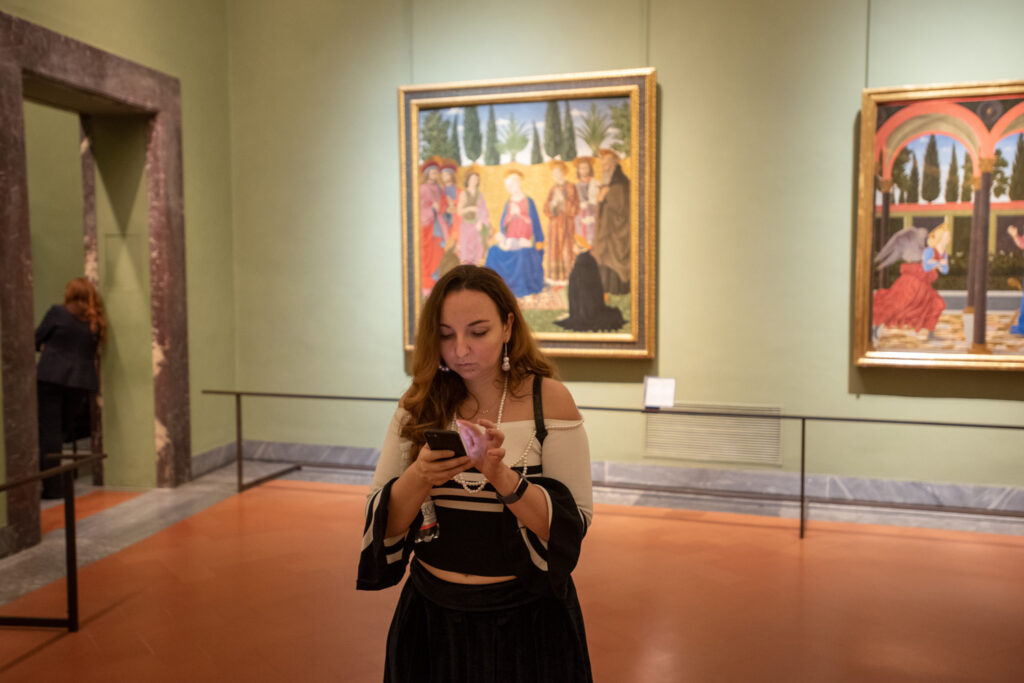 Then we went to Ponte Vecchio where we spent about an hour trying to take some pictures. The view is wonderful, I sat and wondered how many wonders a man’s hand can do. 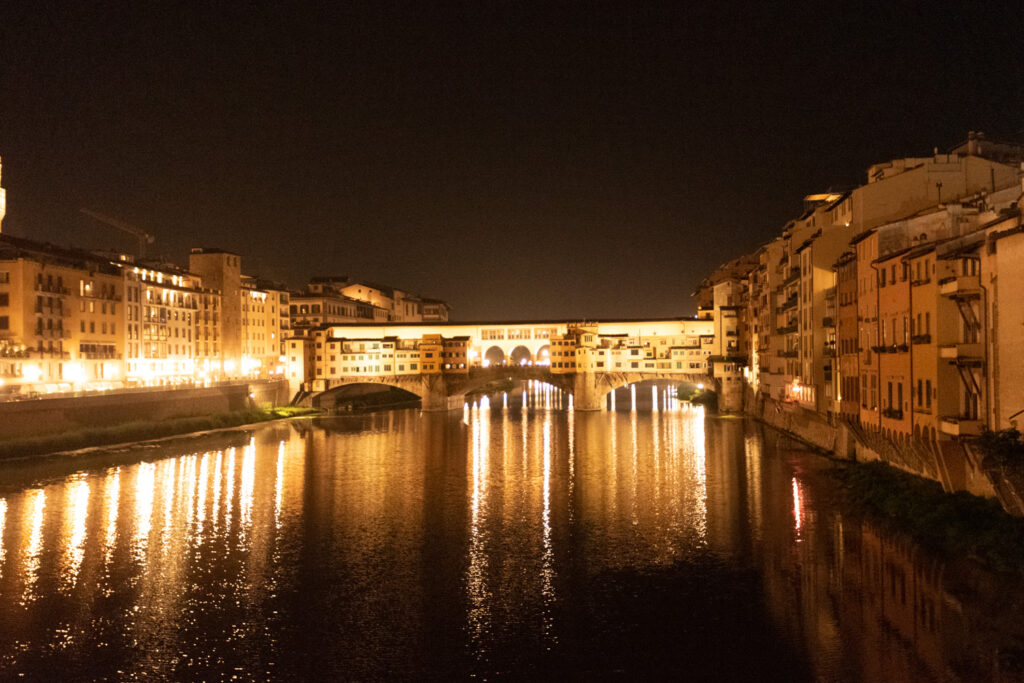 We went for a walk to Palazzo Pitti, which we did not get to visit inside being too tired so we tried to do a wine tasting in one of the places opposite. It was a short and not very memorable tasting. Certainly the ones outside the city are the ones we wanted but because we only stayed there for a weekend, we preferred to stay in Florence. So we were content with what we found.

We walked the city again for a few hours, just walking the streets with no particular goal, simply enjoying every minute we spent there. That’s how we got to Palazzo Strozzi but we were too tired to visit it and we drank a coffee on the terrace (the third of that day). And I took advantage of the moment, and under the guise of having to “powder my nose,” I went inside and bought Daniel a small tiramisu cake for his birthday. I managed to hide it in my bag (although the shape was not nearly the same) and we went to the hotel to prepare for the special dinner of the celebration. 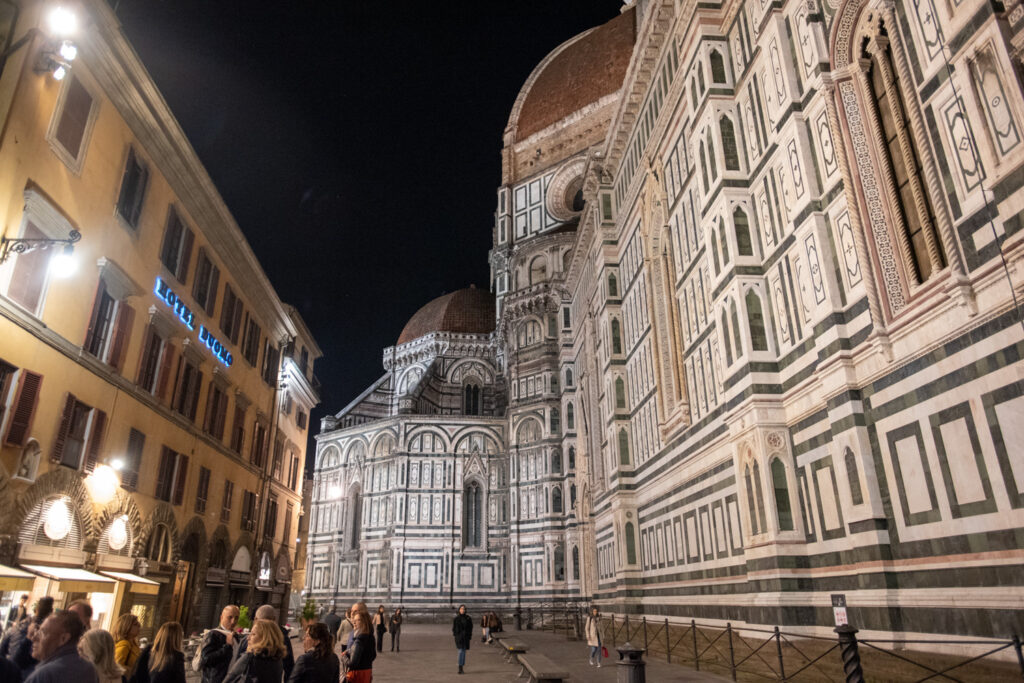 I chose a restaurant far from the tourist area, in an elegant neighbourhood of the city, where the locals go. You know that Daniel’s father is Italian so his expectations in terms of Italian cuisine are very difficult to achieve.

We went to Trattoria da Ruggero, with Tuscan specifics. I ordered bruschetta and Tagliatelle al tartufo (normal) and Daniel started with Pappardelle with pork and as a second course took the grilled lamb. The food was delicious, I recommend the restaurant.

I called before to be sure they were ready with a cake and a candle. They ordered from a confectionery in the area. Since we arrived, they put us in a booth, knowing it was his birthday. So before they brought Daniel’s grappa, they turned off the light and appeared with the cake and sang Happy Birthday. The surprise was … surprise. 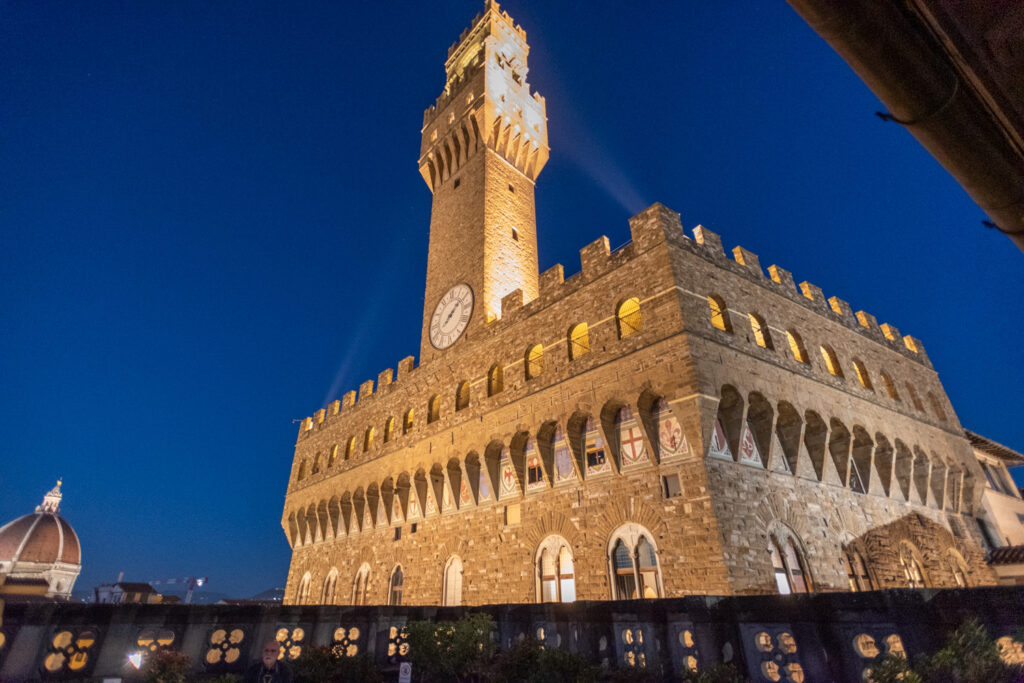 On Monday we both had to work (we are lucky enough to be able to work in travel) and I did research beforehand and chose the La Menagere cafe. Florence is a student city so there are many places to choose from for remote working. Very nice location, good coffee, sweets and interior decorations for sale.

And the best part (for Daniel who loves to cook) is that La Menagere is very close to the market. So during the lunch break I went to a restaurant near Trattoria lo Stracotto (and very good food here) and visited the Mercato Centrale. 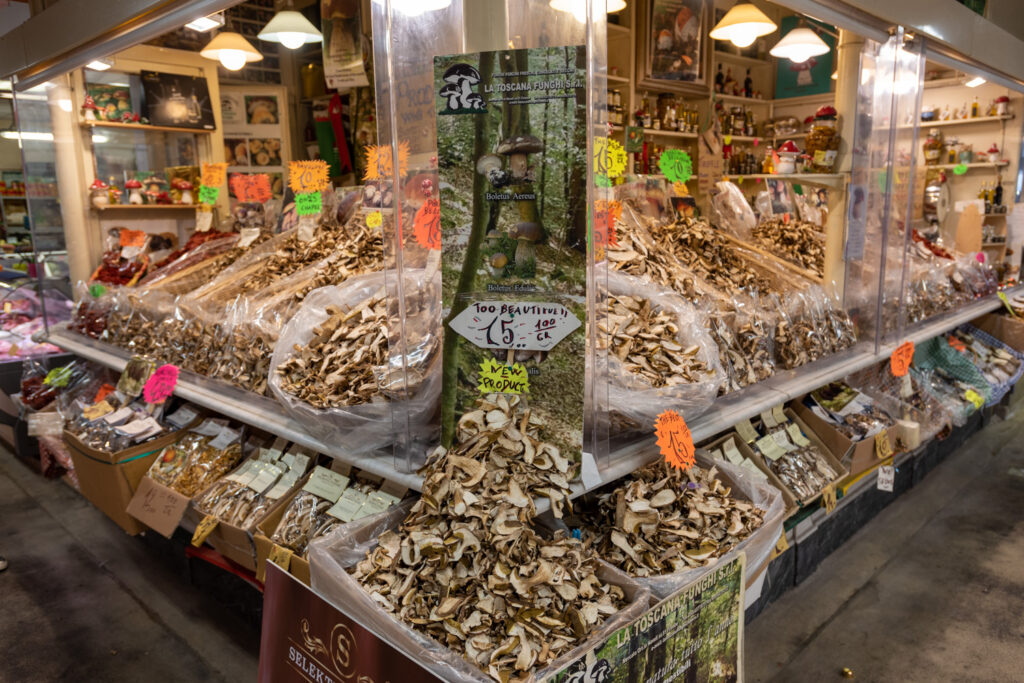 I bought pasta, soaps, mushrooms and completely unexpected, cime di rapa. Daniel loves these bitter Italian greens. I had never eaten until I met him. But now half the freezer is full of them. And I left Florence with five kilograms.

The getaway was memorable. And I would go back to Florence anytime (it’s not the first time I’ve been there and I hope it won’t be the last). Of course there are many places to visit in Tuscany and it is so difficult to choose. But a whole weekend in Florence is not boring at all. 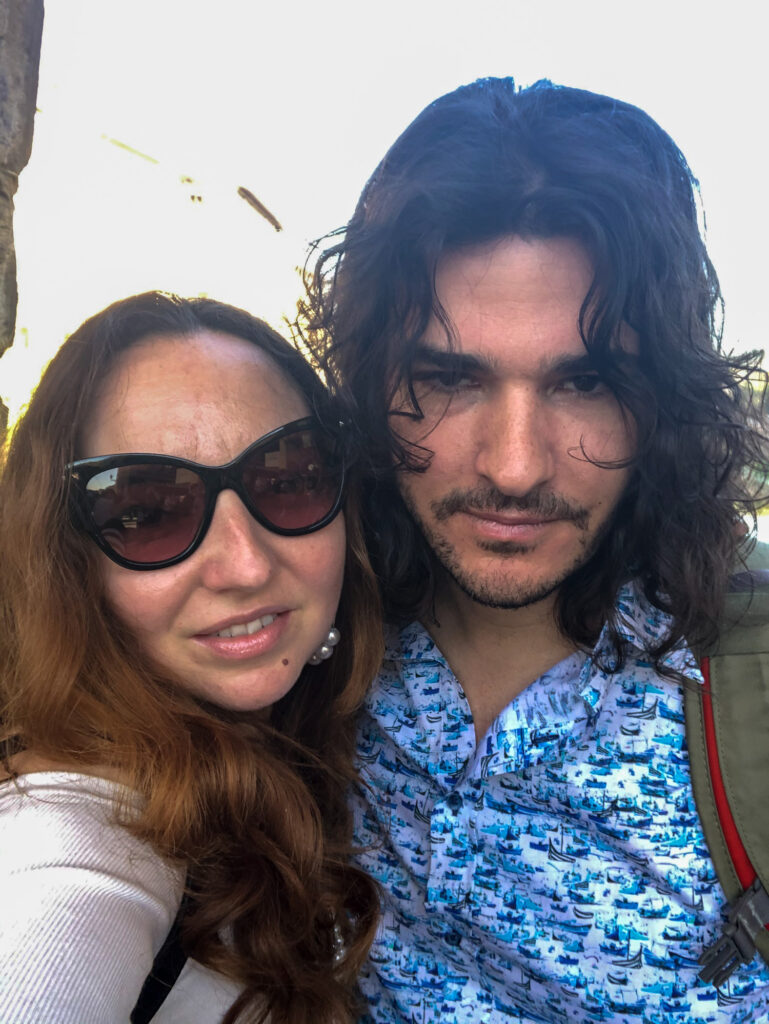