I have so much to say about Capri that I don’t know where to start.

Italy is my favourite country (after Romania, of course). I go there at least three times a year, often to repeat destinations. It’s very easy to discover new streets with crossroads full of miniature sculptures and you wonder how it happened that you didn’t see them during your previous visit.

But today I’m going to talk about Capri, the island of my soul. 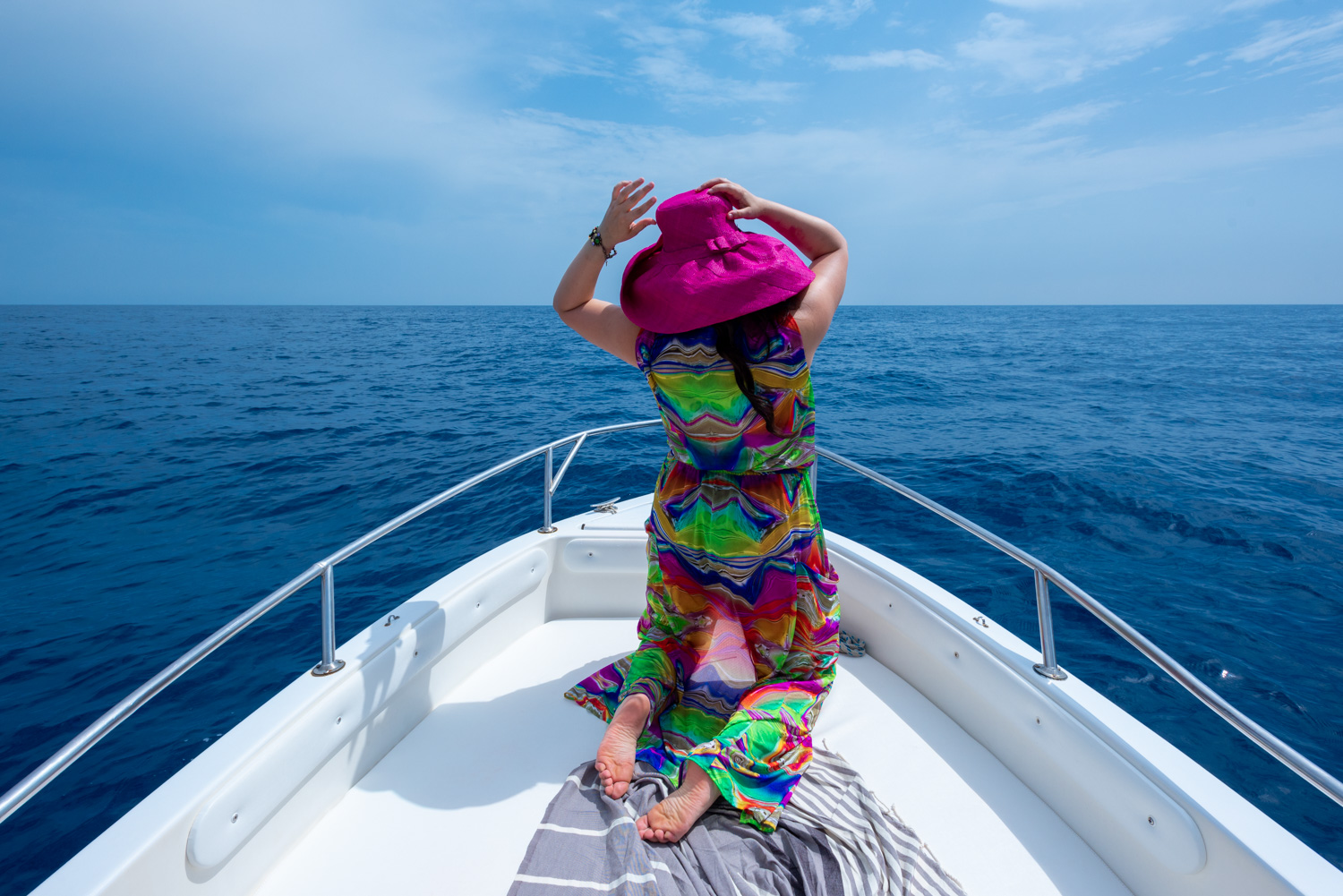 Two years ago, about the same time as now, we were both sitting on the beautiful balcony of our apartment in Luxembourg (the balcony was actually a terrace as big as a living room) and we thought we should make plans for our summer vacation.

I had had a contract in Naples seven years ago; I stayed there for six months at a hotel in the city center. During the week, my Italian colleagues (or a taxi driver, Enzo, who I befriended and still talk on Facebook and see each other every time I return to the city at the foot of Vesuvius) would take me to the Capodichino International Airport where Atitech, an aircraft repair shop, is located. But on weekends I could walk or drive around the area to see the small towns of the Amalfi Coast, Caserta, and Capri. (I will definitely make another post about my time in Naples.)

So, I proposed Capri as a vacation destination and Daniel was immediately on board. It is important to mention that until we met, I didn’t plan out my trips that much: I found the hotel and booked the flights and for the rest, I decided on the spot. But this time, I did as he does; for a whole weekend I looked for restaurants, aperitivo locations and accommodation. But don’t think we did it together! Nooooo, I did it by myself! I made an itinerary for the first time in my life. I called the restaurants. I made the reservations. Everything was ready months in advance. I wanted to plan in every detail the trip we were going to spend in my Italy. His too actually, as his father is Italian.

That being said, we decided together on the path to build our trip. If you do not have a rented yacht, it is ideal to land in Naples and take a ferry from there. The ferry trip lasts a little over an hour (of course the wind has a say in the journey) and takes you to Marina Grande. In Capri, in the summer months, non-residents are not allowed to drive (roads are limited and very dangerous, the roads are so narrow on some hairpin turns that when cars approach the bend, they honk at each other blindly and proceed with great caution). So from the marina, you either take a car sent from the hotel or you take one of the island taxis that looks like an extra-large golf cart colored in pink, blue, lime or a very strong purple. Summer holiday colours – full of life as the Italians are. 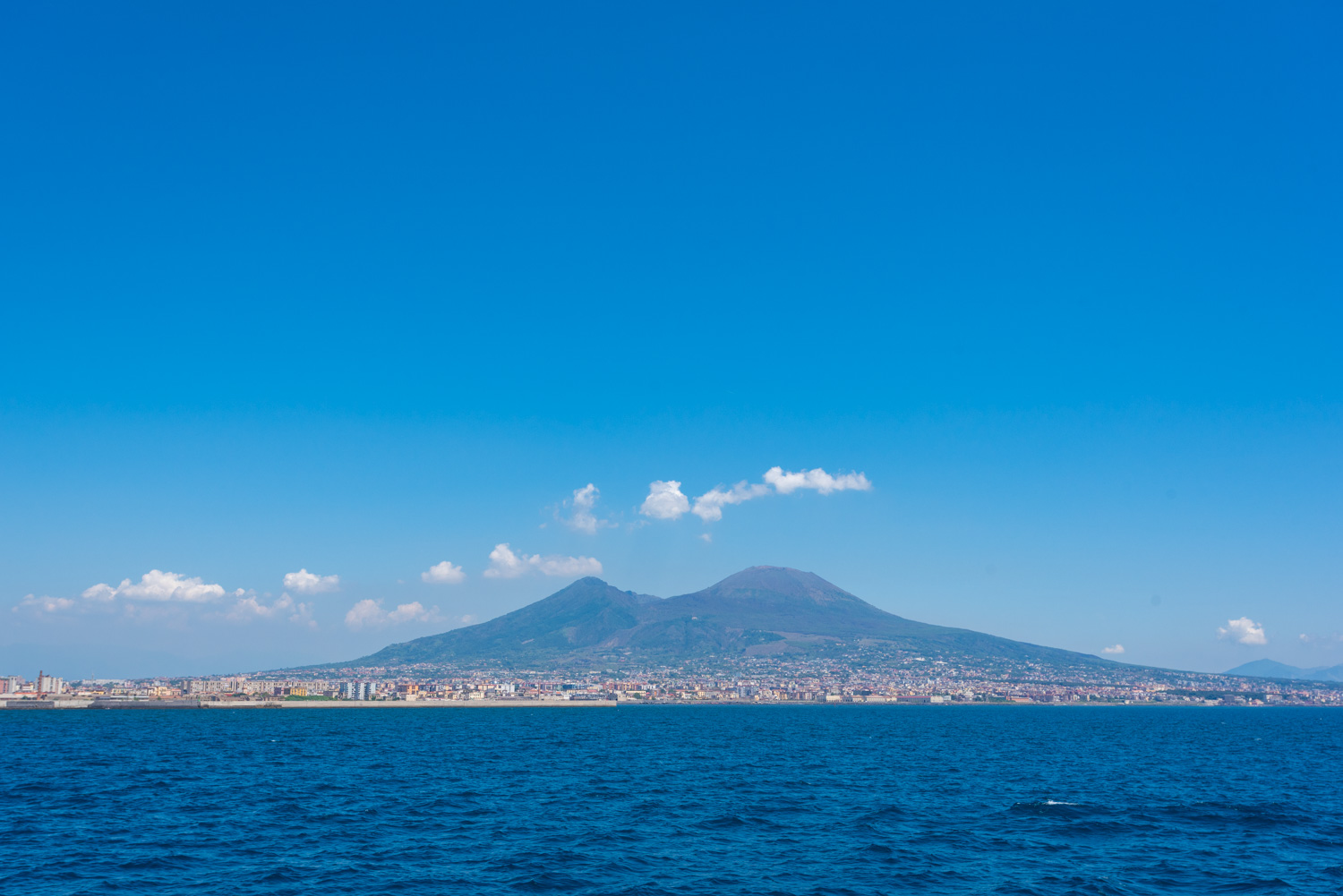 We took a taxi to our first destination: Anacapri, at Bed & Breakfast Monte Solaro, where we stayed for one night.

The taxi driver dropped us off in the middle of the road and pointed to a house on top of a mountain, saying we had to get there. There’s something you need to know about me: I don’t travel light. Not at all!!! I also saw Daniel’s desperate face at the thought of having to drag my luggage uphill. But we couldn’t even find the road we had to climb; it was hidden behind other houses. Finally, the owner of the establishment came to take us in a Jeep; we managed to reach the reception and we were amazed by the beauty of the panorama. It was wonderful, it was perfect, the blue sea, the green nature and the elegant buildings shared the landscape in a harmony full of life but soothing at the same time.

In the courtyard they have a bar that can offer you coffee, wine or Aperol Spritz (or Campari Spritz). And also there, on the terrace with the beautiful view, you can have breakfast. 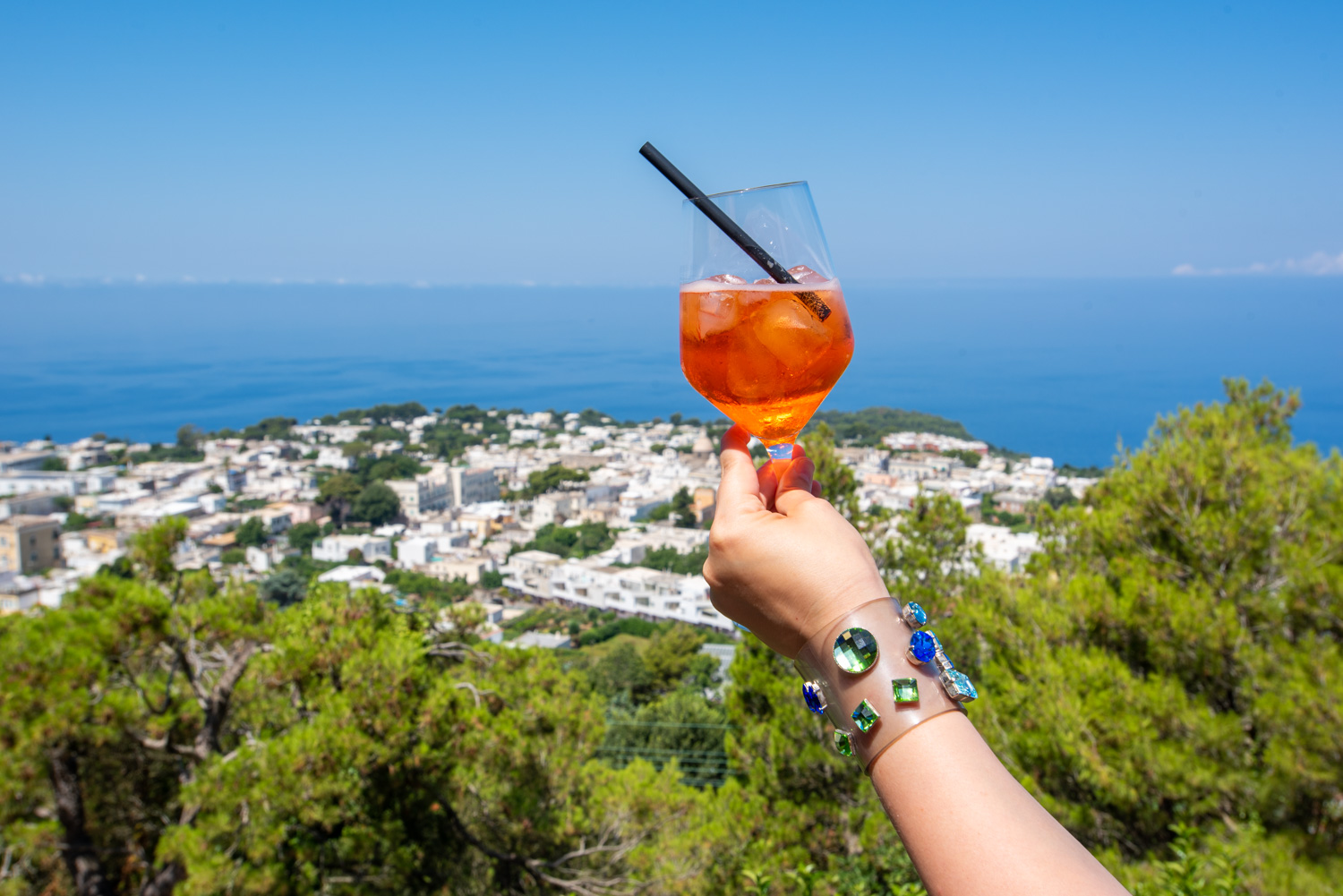 Anacapri is an authentic Italian town, very sweet, with white houses, full of cute terraces made more beautiful by multicoloured flowers, Italian restaurants (the fact that there were mostly Italian restaurants seemed to amaze a couple of New Yorkers with whom we became friends). The novelty compared to my other visits to Capri was that absolutely all the staff in the shops, cafes, bars, restaurants, spoke English. Although the charm of the place is perfectly complemented by the sung local language, full of vowels spoken with all the mouth and in abundance. We know that Italians like to talk a lot.

The restaurant we chose in Anacapri, Pizzeria Aumm Aumm, was the most traditional of all. And it was by far the best. Authentic aperitivo, bruschetta, rapini, spaghetti al pomodoro (my favourite), the house wine, everything was memorable. I recommend this restaurant with an open heart.

The night walk we took after dinner (una passeggiata as they say) was very relaxing, the combined smell of sea and mountains, the sound of the waves of the Tyrrhenian Sea, along with the rustle of the mountain forest and the muted Italian music played in all places on which I passed was full of tourists and full of joy. A holiday atmosphere that only Italians know how to offer us.

The next day we moved to an Airbnb in Capri, close to the center, which overlooked the Gulf of Naples. When choosing our accommodation, the essential requirement is to have a view of the sea, river, lake, or water of any kind. Don’t forget that I have the roots of the family tree in the waves of the Ionian Sea, that’s why I love the sea madly. And for Daniel, the views were all he needed to find perfect angles for photography.

During the day we walked around the city, shopping, going to various beaches (my favourite was Bagni Tiberio, or Emperor’s Beach where the Roman emperor spent many days) or we rented a small yacht that you are allowed to drive if you have a driver’s license. 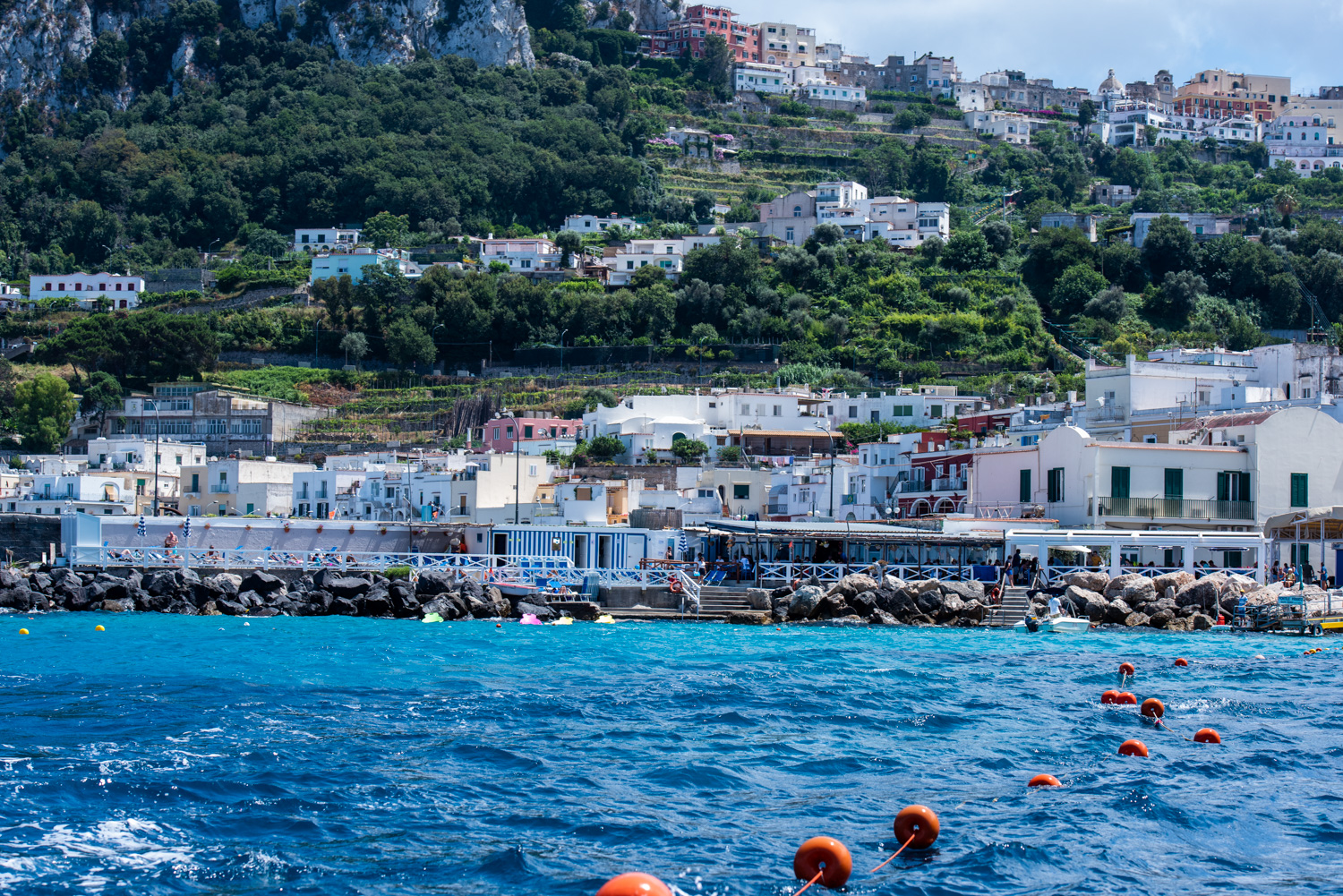 To get to Bagni Tiberio you have to go to Marina Grande and from there the owners of the location take you by boat to go to the beach. There is no sand, only pebbles and the sea gets deep very quickly. They have sunbeds, espresso that I would not replace with anything in the world, prosecco and the waves that dance in a show as if staged especially for you. There is also have a restaurant with pretty good seafood. 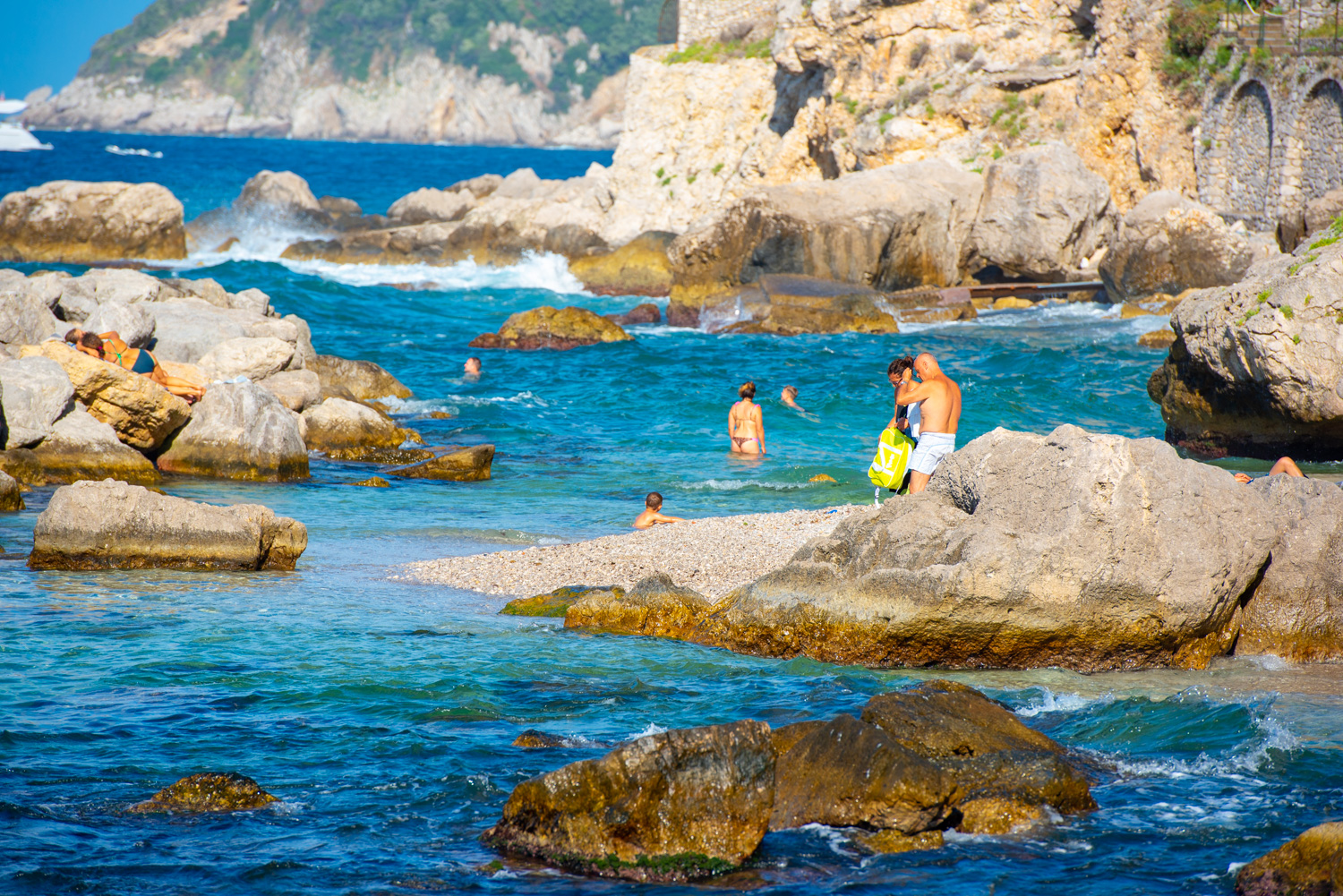 I also really liked the days when we rented the boat (from Marina Grande) and went around the island, among Faraglioni, to try to see the famous and rare blue lizards. Daniel wore his newly acquired Panama Hat, Capri edition and I sat like a mermaid on the bow and admired the beauty that lay ahead of me. We set anchor where it seemed the most beautiful to us (we had a map and we knew the locations where we were allowed to stop) and we threw ourselves into the transparent and cold sea. We had lunch on the boat: prosecco, mortadella, prosciutto and mozzarella. We sat in the sun, listened to music and I read. 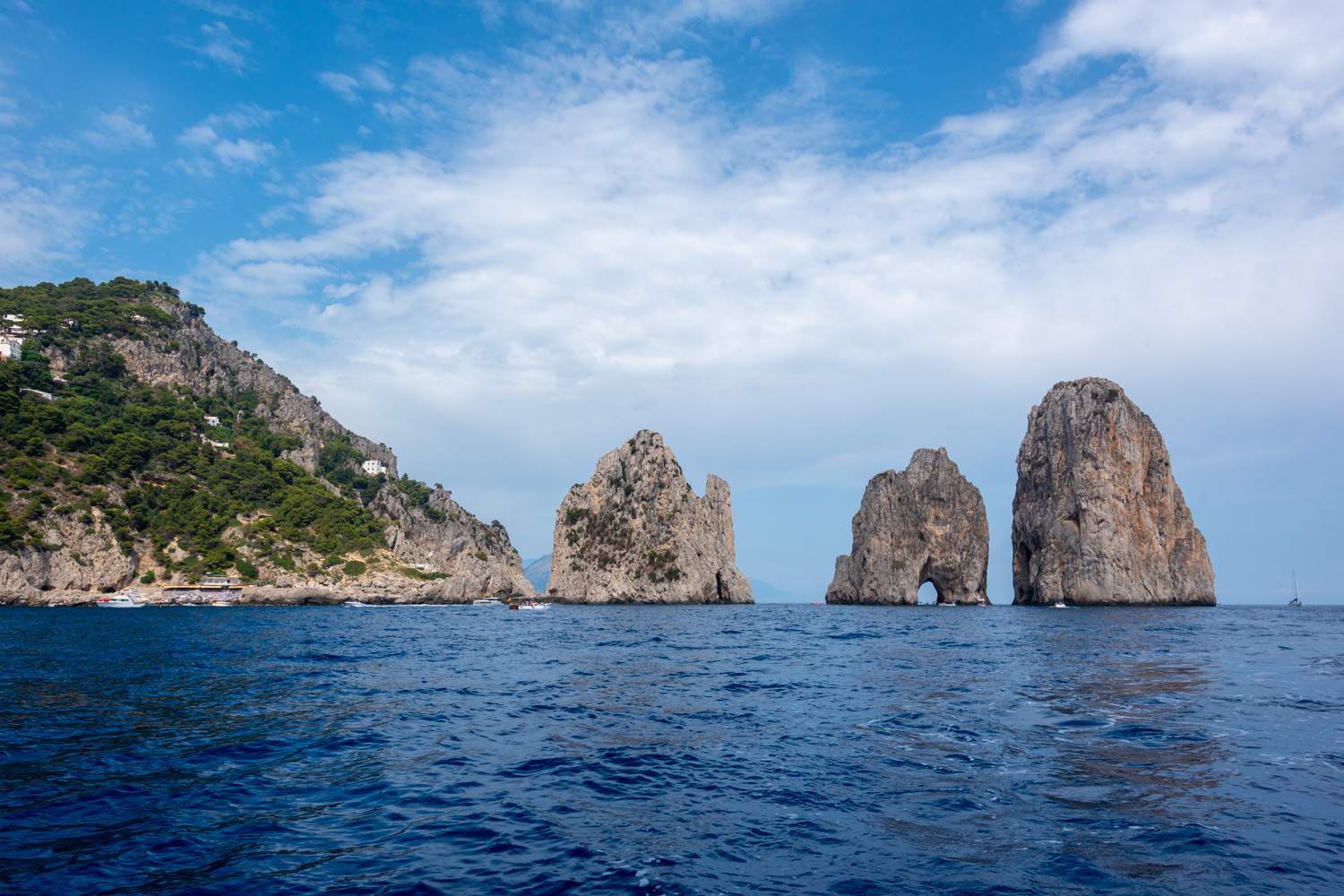 In the evenings, we went to restaurants that have been frequented by various personalities. One of them, Ristorante Paolino Capri (where Tom Cruise or Chiara Ferragni spend their evenings when they come to Capri) has a huge terrace covered with a ceiling of lemons; you can pick them by hand. The food is good but not memorable. But what remained in my mind from there is the Swedish buffet full of sweets, of all kinds and all colours, wonderful in both appearance and taste. Another memory from there is a little less expected: there are many cats among the tables, which are in their element. I love cats, I love them. They do not ask for food or attention but simply take care of their lives. Many people try to attract them, to play with them. But there was one particular lady who started shrieking that cats are evil and she was asking the restaurant’s representatives to take them all out of the yard, to lock them up somewhere. This episode happened not once, but twice, the second time even getting on the chair. I don’t think there’s any point in saying that no one bothered to do anything but to call the cats away. For the moment the cats seemed to accept the situation; as if realizing that they were unwanted, then they returned proudly and victoriously to the yard, after eating a leftover shrimp, offered by a waiter. 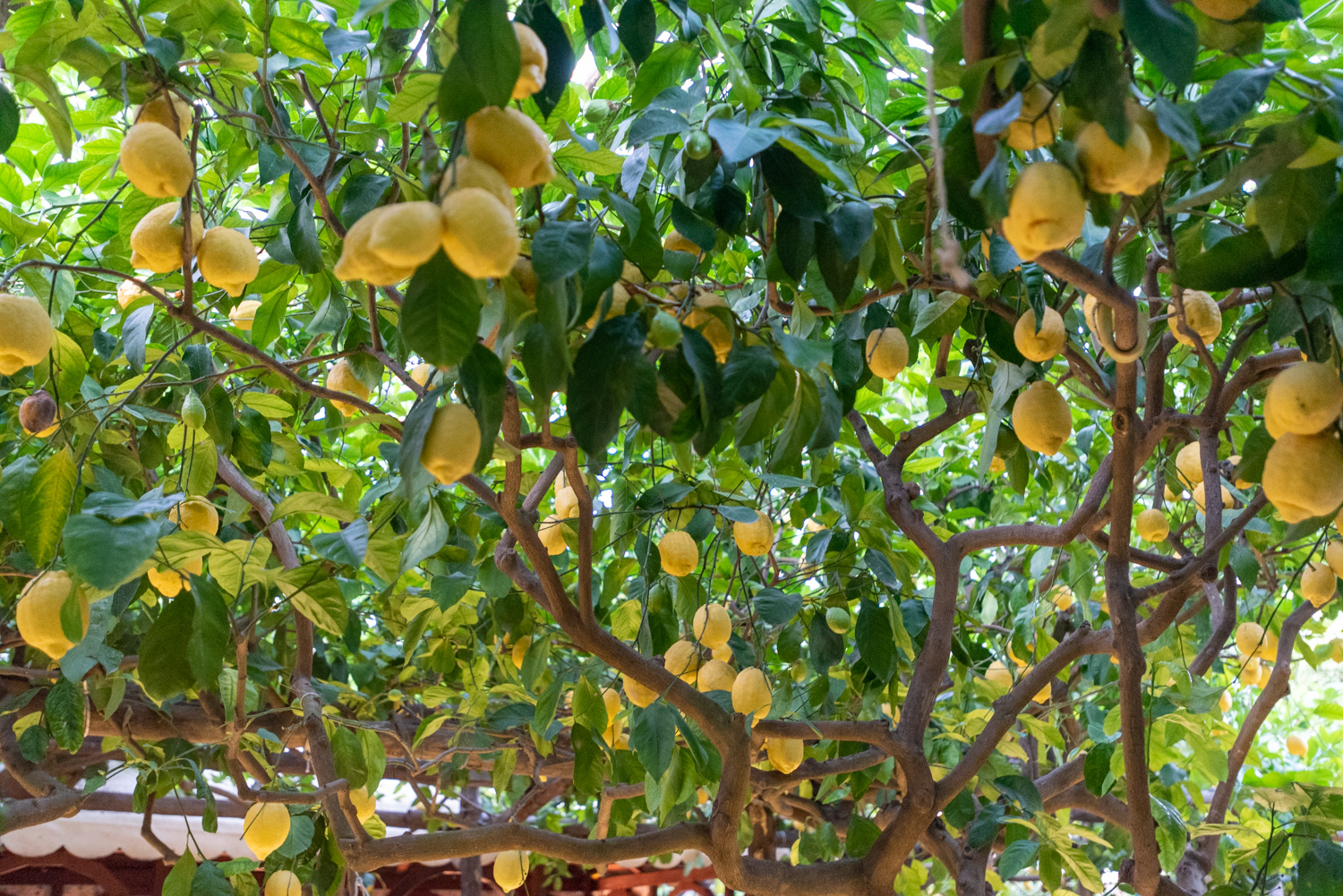 My favourite location is Hotel Caesar Augustus Capri, La Terrazza di Lucullo restaurant. I recommend you go there for dinner, to see the sunset. It is a sight you will never forget. It is not cheap (they have predefined menus), but it is worth it in exchange for the experience. 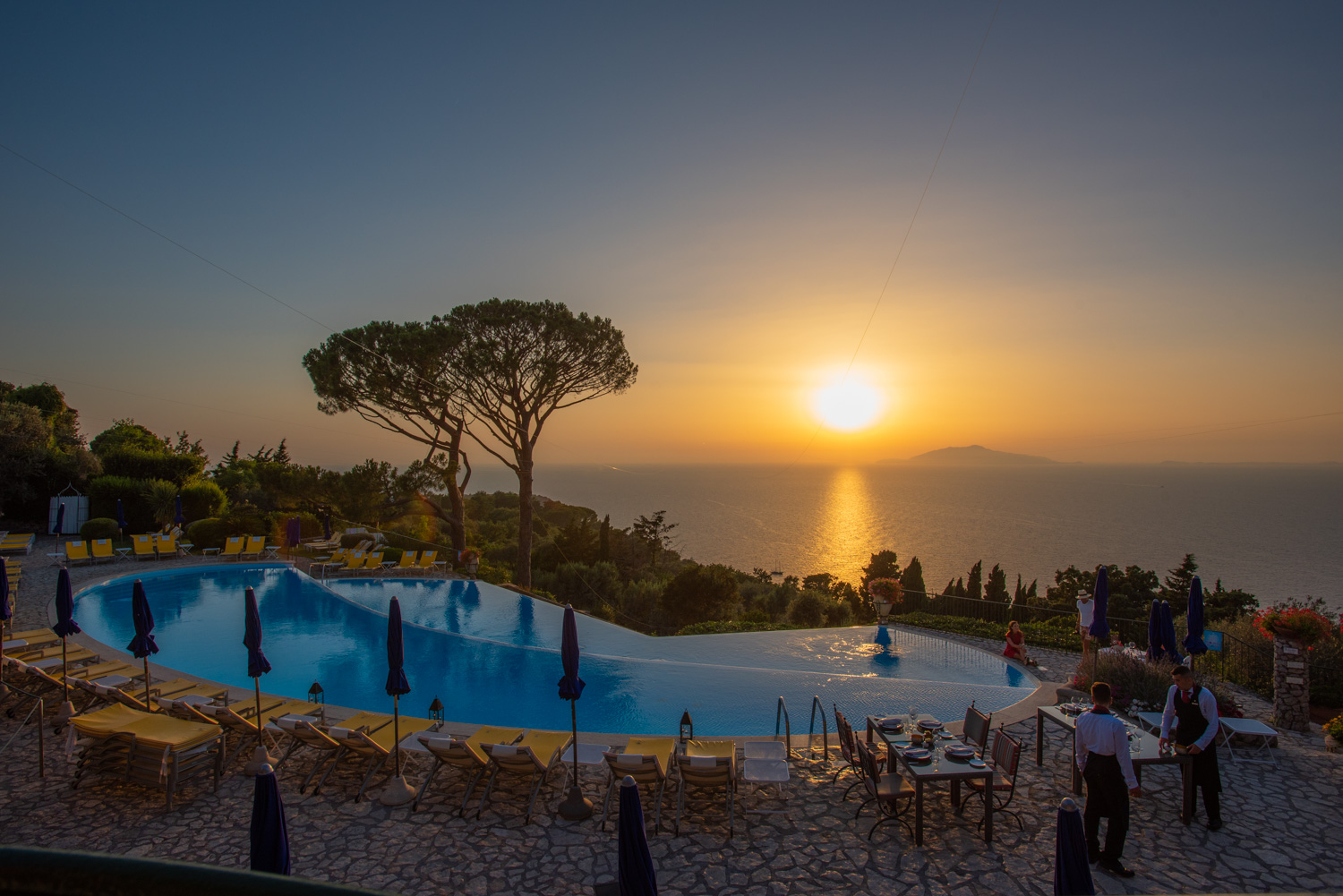 We also changed the Airbnb because we wanted to have a view on the other side of the island, towards the Faraglioni and La Fontelina where we wanted to spend a few days at the beach, but it was booked six months in advance. We stayed at the Regina Cristina Hotel. We had a room on the top floor with a large terrace with two wooden sun loungers and wrought iron garden furniture. When I opened the door in the morning and looked out to sea, I did not know how to be more grateful to God for the beauties in front of me. 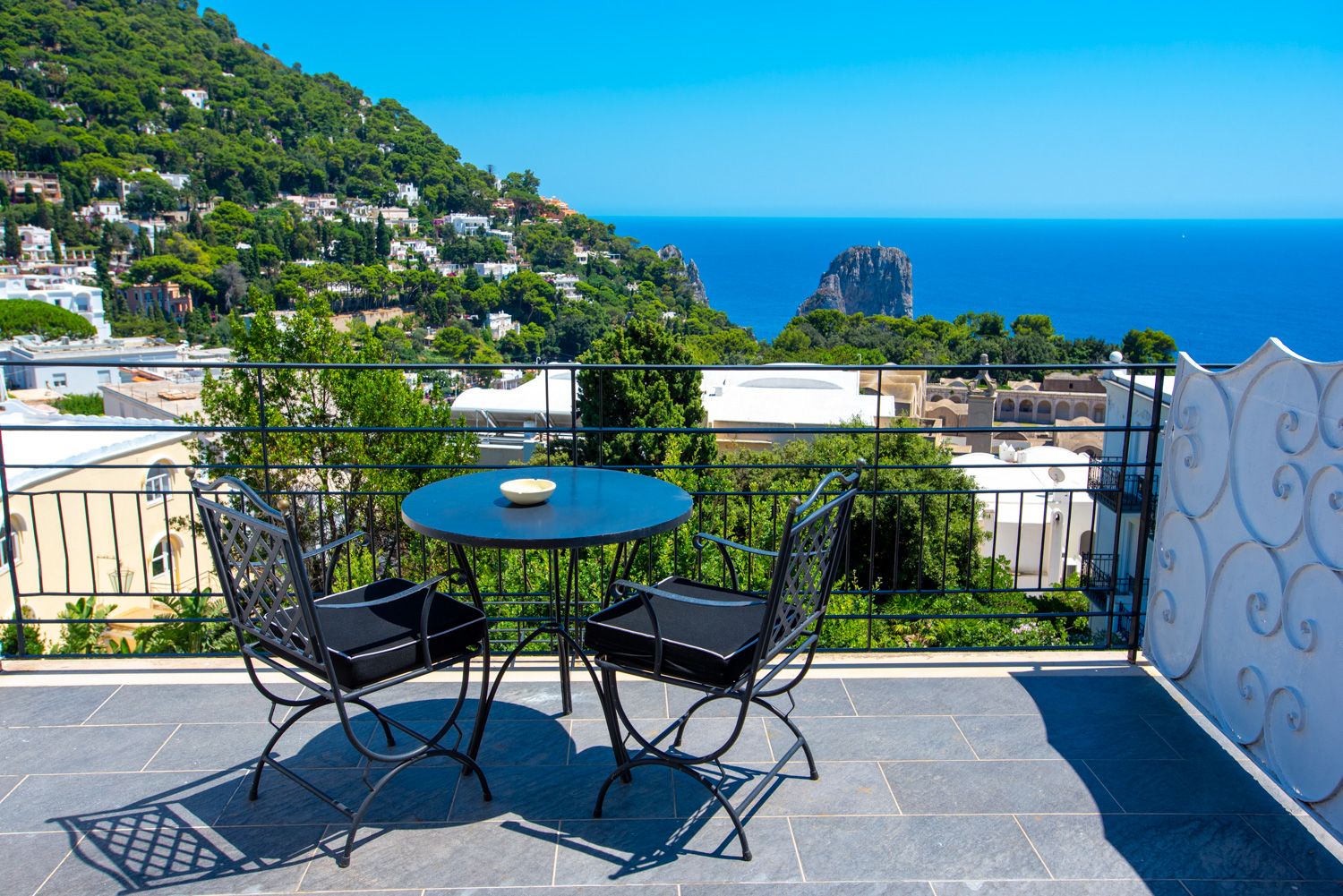 For one of the nights, we chose a restaurant with a Bohemian atmosphere, È Divino. We ate in the yard but the interior was spectacular: each room looks like a dining room or a living room, with fireplace and sofa, of a normal house. The food is not special but they made me a portion of spaghetti as I requested.

Another good restaurant is La Capannina, a restaurant established in 1931, where I ate the best fried mixed seafood ever. 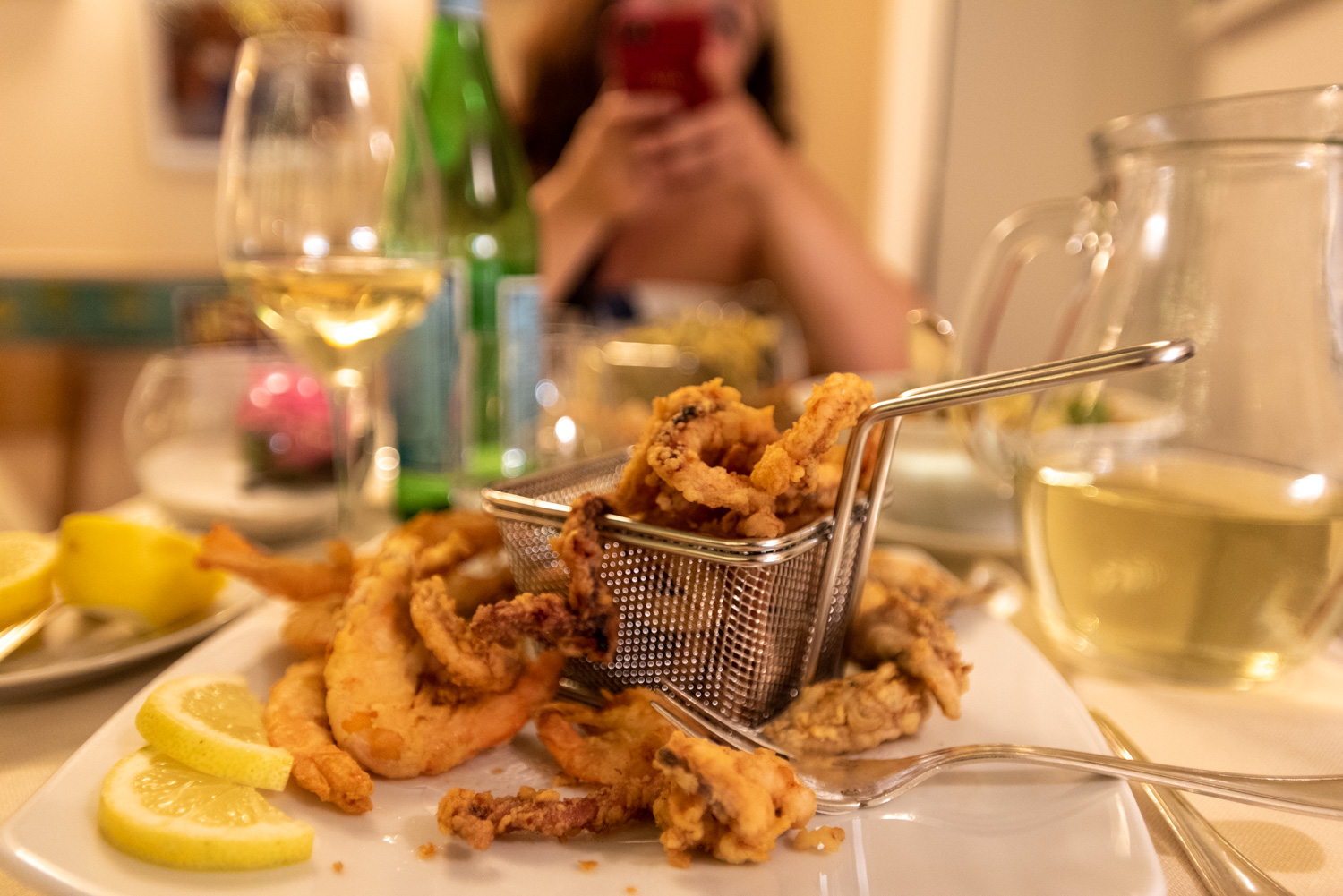 We spent the last night at Pulalli Wine Bar, located right in the Piazetta (central square) in Capri, in the same building as the Clock Tower. There I ate the best lemon risotto (which was not simply put on a plate, but served in a hollowed-out half lemon). Of course, we also tried the recipe at home later on, when we made a dinner for friends and it turned out very good. We will put the recipe in a future post. 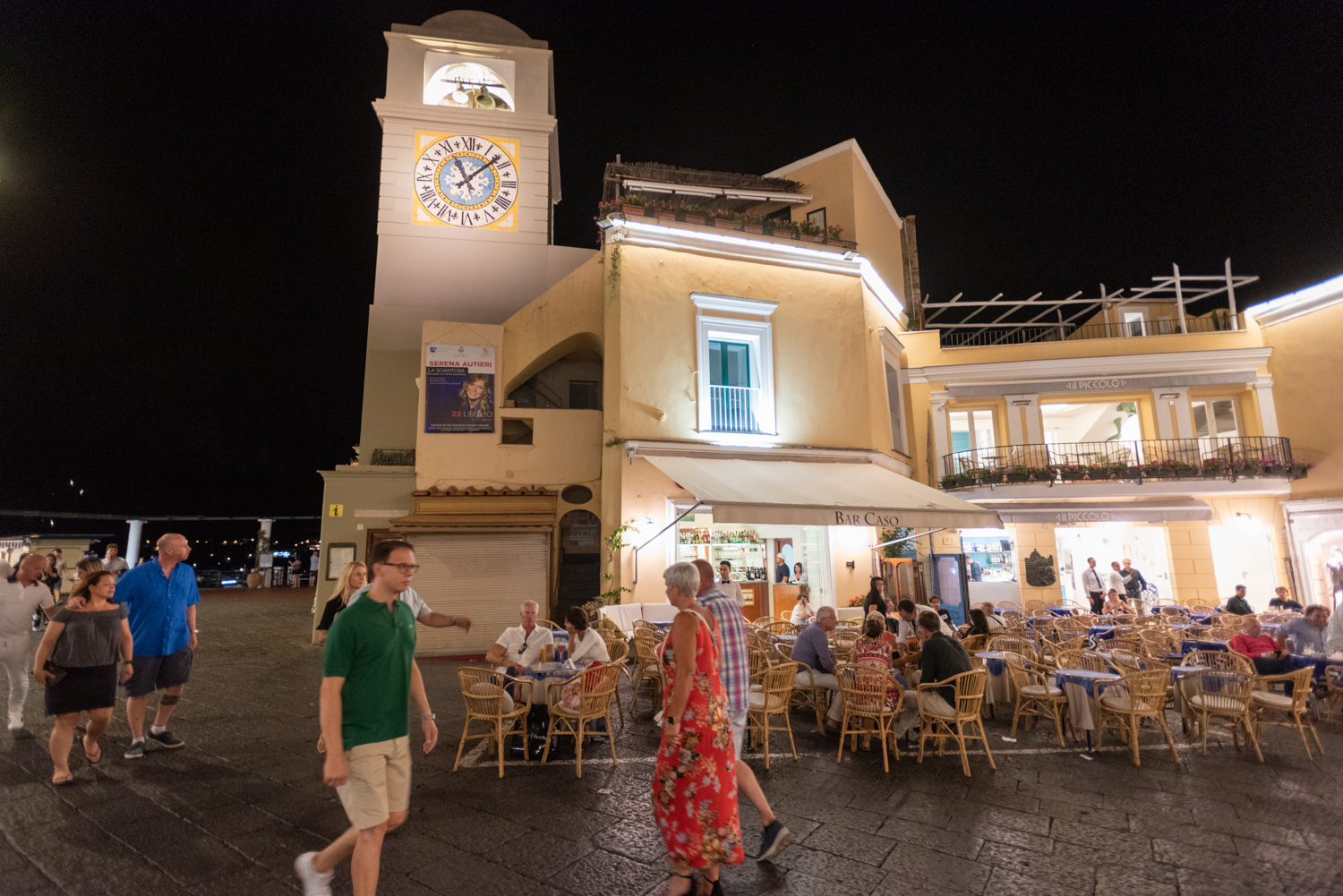 Capri was also, during the Roman Empire, the place where the rich who betrayed the emperor, but managed to avoid being killed, were exiled. Also in Capri, Axel Munthe, the Swedish psychiatrist, bought Villa San Michele, which he restored.

On our next visit to Capri, we will climb the 784 steps (or take the funicular) to Anacapri, where we would like to spend more time.. The bottom line is that if you like the sea, Italian food, shopping and luxury in general, Capri is the place to go. You will definitely not regret it!

1 thought on “Capri: a vacation to the island of my soul”