At APOC we had one of the best parties ever.

Let me start by telling you something about Max, the CEO of APOC Aviation. He is awesome!

He is a man with a very good soul, a man who made money and knows how to spend it, knows how to have fun, knows how to live. He is not like those businessmen who make money and are completely absorbed in work – it’s the other way around: he wants to be at the office as little as possible (although he doesn’t do a very good job at it), he hates morning meetings (and me too hence I start working after 10.00). He is very relaxed and knows that stress does not help him or us. Max also likes expensive restaurants, private jets and luxurious life in general.

Max decided that he wanted to have a party at our headquarters (the place where we have the offices and also our parts warehouse) because we had just recently moved to a new location and because APOC is five years old. 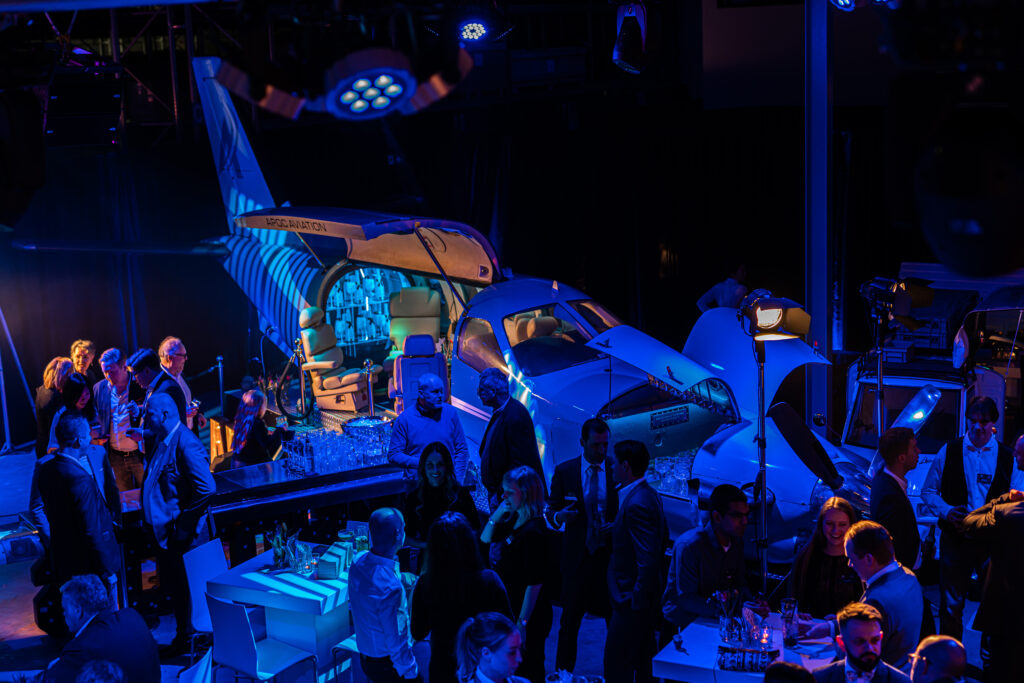 Said and done. Together with Suus (Max’s Personal Assistant and a very good friend of mine) we got to work. In aviation, everything is very elegant, expensive, luxurious, and sometimes taken to the extreme. So we started making the plan with everything we thought could appeal to customers, investors, suppliers, competition and repair shops. It had to be different, unique, instagrammable and unforgettable. And to all this, Max added a little more.

We also hired an event organization company from the Netherlands and of course we also worked with Jane Goring from Inter Relations for the media communications part.

The theme of the party was APOC Rocks. And so it was a party that rocked! 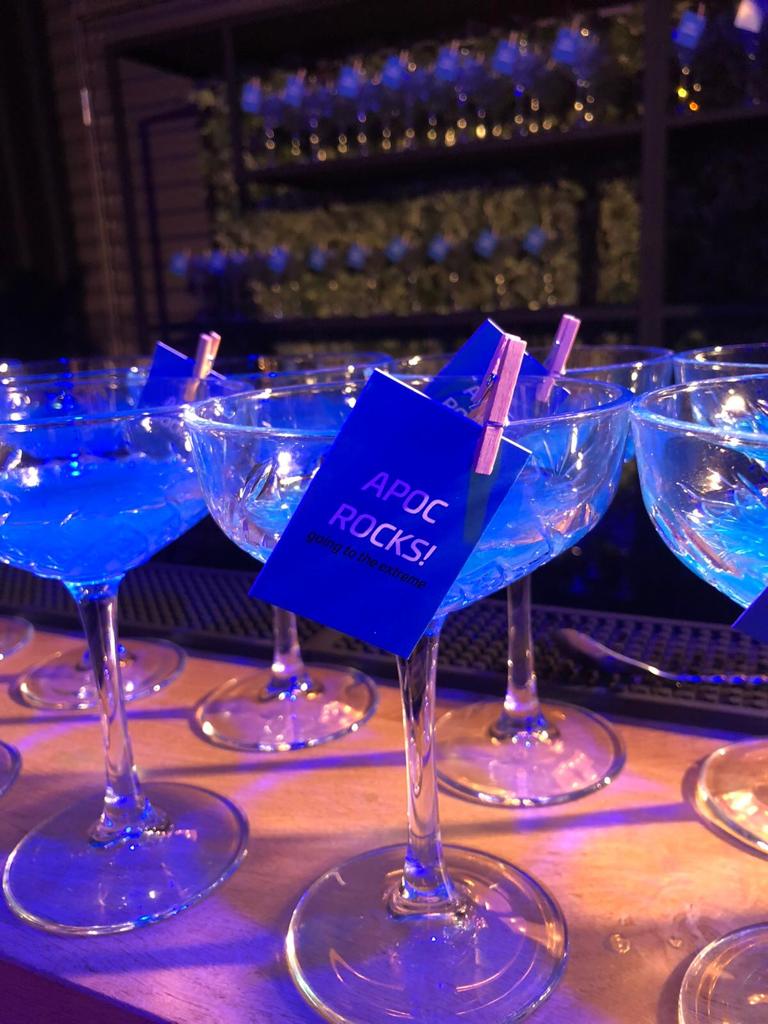 We decided that the party would take place in the warehouse (where there is a very high ceiling); we would have black curtains to cover the shelves (as he said in other articles, aviation is very regulated so I could not leave the parts visible). This also meant that large parts (e.g. the round metal part that covers the engine) had to be moved elsewhere. So we rented a warehouse in the area just for this period.

We knew we wanted our guests to feel like VIPs so having a red carpet at the entrance was a must. Two hostesses dressed as flight attendants were to staff the wardrobe, giving out name tags. We looked for catering, alcoholic beverages, band and DJ, lighting suppliers (worthy of such a party), gifts for the gift bag at the end, furniture, fireworks, photographers, photo booth, flower arrangements and that something that was going to be the WOW element. 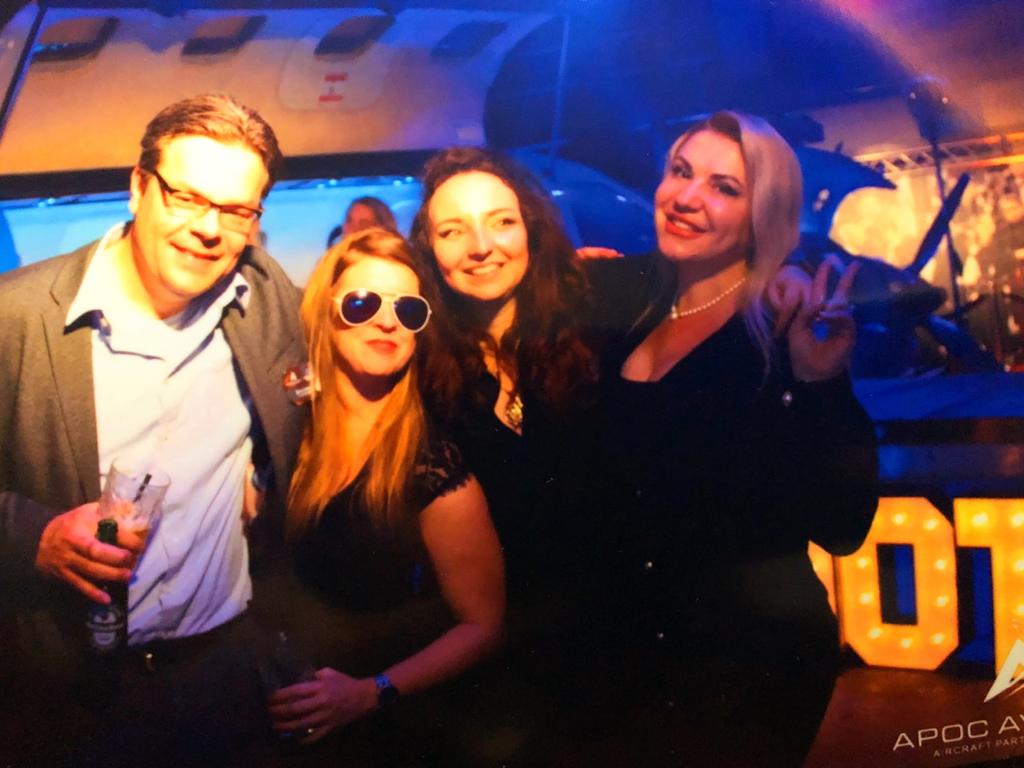 Of course, Max came up with the WOW element, namely a private jet that had been transformed into a bar, which we will put in the middle of the warehouse, being covered with the APOC colours: white and blue. The company name was printed on the tail, as if it were an airline. The whole party was to be concentrated around the plane, as expected. And the sketch of the warehouse started from this point, a sketch that changed about five times during the planning stages.

We invited around 500 people, knowing that it is not easy to bring people from all continents and that we do not have more capacity than that (usually, at such an event, 50% of the invited people participate). 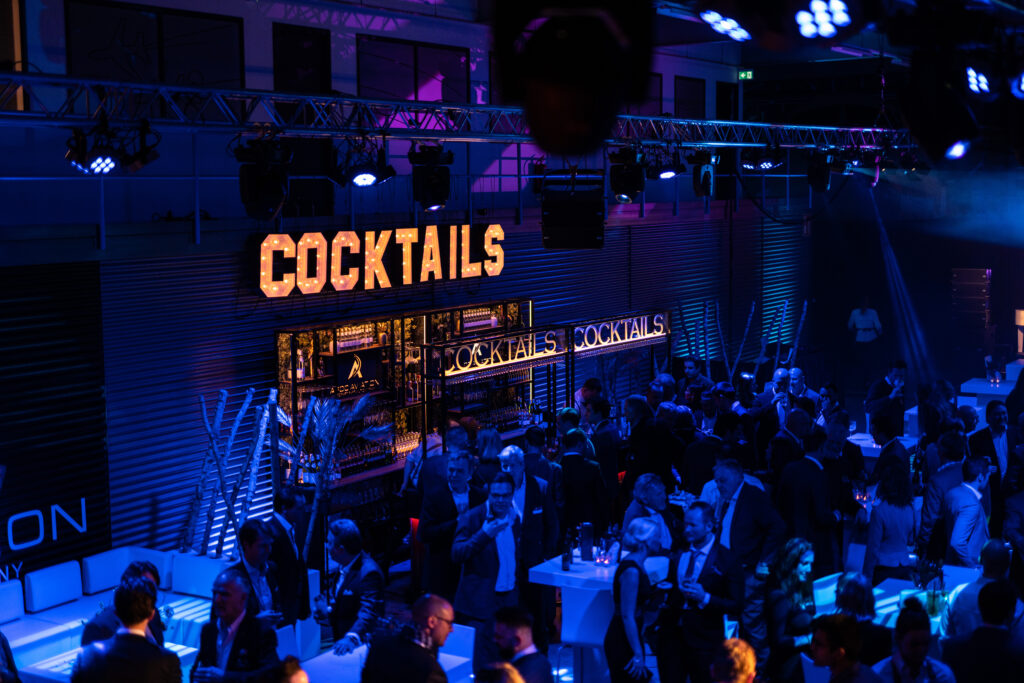 After about a month and a half of hard work by four people, we arrive at Wednesday, one day before the party (which was to take place on Thursday, February 20).

The private jet came first. Then the crew with the lights. When they started, it was a real showdown. It took about six hours to put the cranes with spotlights (which shone in white and APOC blue), the half-meter-high letters that directed you to the bars (I had four bars in total), the photo booth and the stage.

The next day, Thursday, the bar teams also came. Bars branded with APOC that were to be prepared at the entrance with an Aviation cocktail and during the evening to make a menu of five other different cocktails (superbly arranged). At around noon, the DJ and the band came and arranged the stage, with piano and other instruments. 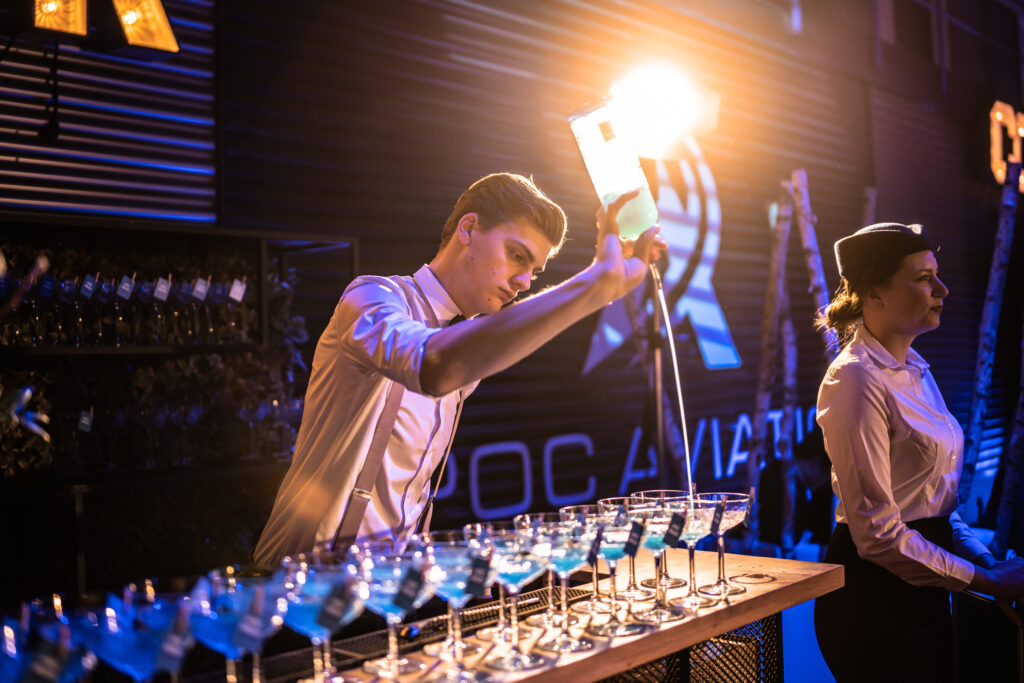 My plan was to go to the hotel at 3:30 p.m. to change and get ready, given that the party started at 6 p.m. and I should have been there earlier. We negotiated with two hotels near our office to accommodate our guests and we had two vans offering a shuttle service between the party and the accommodation. I couldn’t leave at the time I had hoped because the Espresso Cart hadn’t arrived. And I waited and waited for nothing. Suus went to the hotel where she met Dorette (we are the three women at APOC and we get together regularly either to drink wine or do our hair, as it was in the present situation). I left around 4.30 pm, the coffee machine still hadn’t come and I didn’t have room for it anymore because I changed the VIP Area a bit, where everyone (after leaving their clothes in the wardrobe) came to pose in front of the two photographers. But the owner of the lighting company, with whom I became friends, made sure to find a place for the Barista. 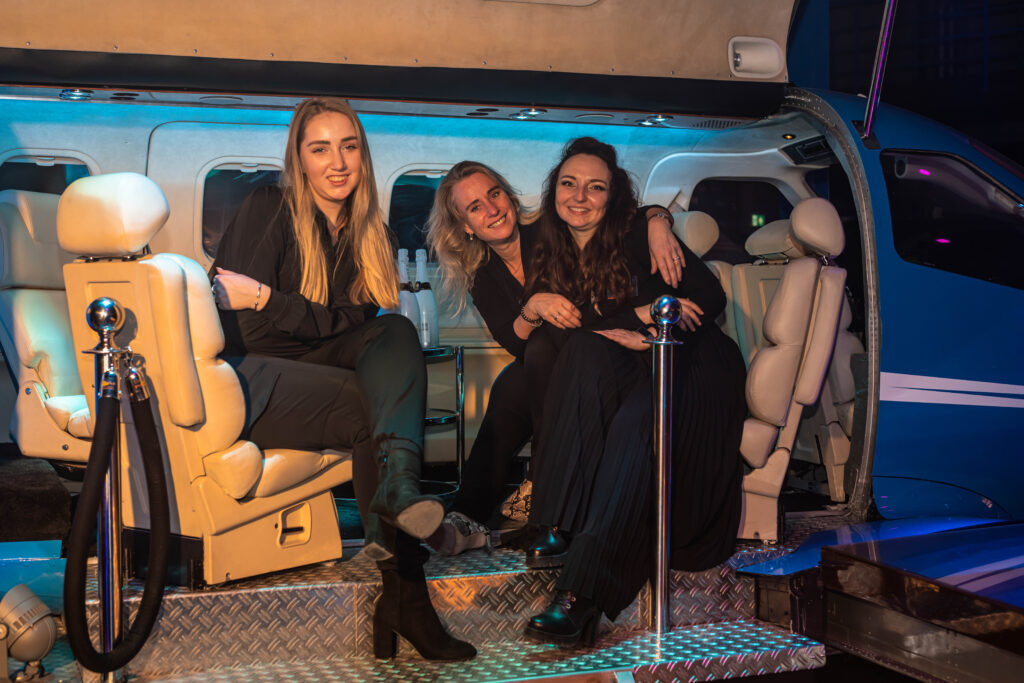 Suus, Nina and myself

I arrived at the hotel, I took my evening outfit out of my luggage, Business Chic being the dress code and Dorette and Suus arranged my hair. I arrived back with the first guests (to my shame).

It started to rain and as such the outdoor fireworks could not happen (and I had planned a majestic finale with APOC written in the sky), the wind was blowing and the smoking tent could not be arranged and the ladies’ dresses were a little higher than they wanted. But this bad weather made the entrance to the event even grander: the X Plane triumphed in the middle of the room, with the lights perfectly oriented to the APOC. Every bar, every cocktail and photo booth had our branding. I also had the signage for social media because I was planning to make this party memorable (social media is not big in this industry). 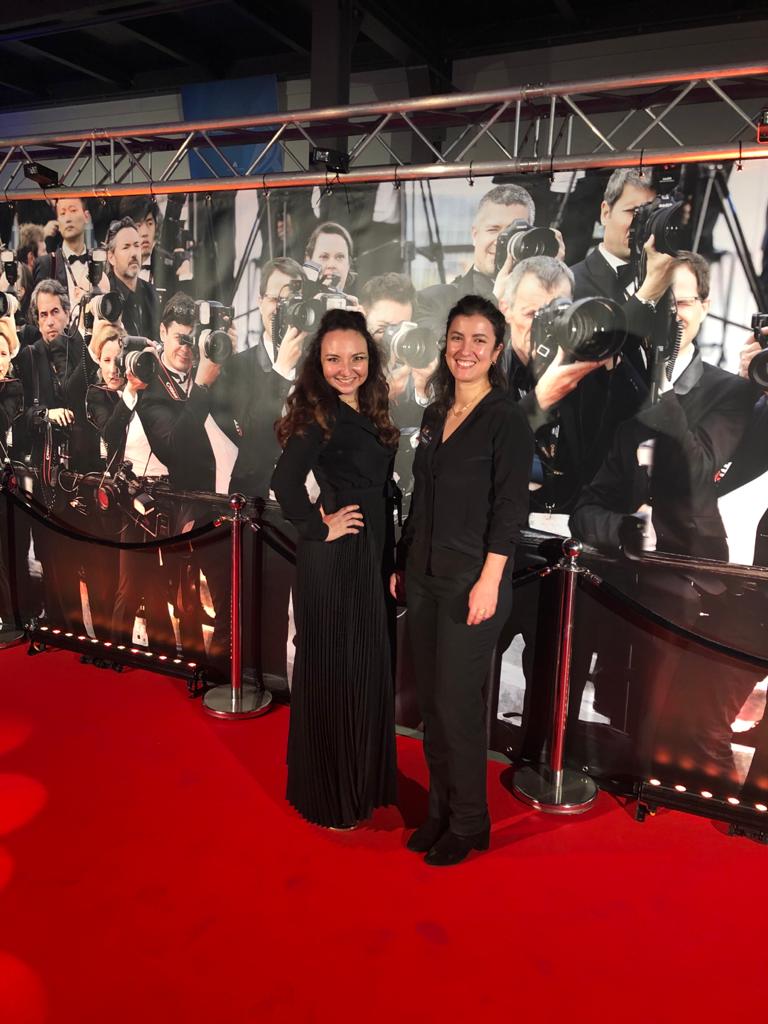 We had a dynamic and unexpected presentation, with rock music in the background that lasted three minutes of aviation history. History that stopped today, at APOC, where Max entered the stage and gave a speech exactly as he wanted: 150 seconds. At the end of the speech he thanked me and Suus for our involvement. And after the party, he sent us two huge bouquets of flowers to the office.

After the presentation, the food started to come. It was luxury finger food, with beef, oysters, tuna, mozzarella, but everything was very refined and beautifully arranged. And at the end of the evening, we had snacks: french fries. The band and DJ had three rounds of 45 minutes each but although the plan was for the party to last up to a maximum of 1, the DJ stayed with our guests until 4 in the morning. 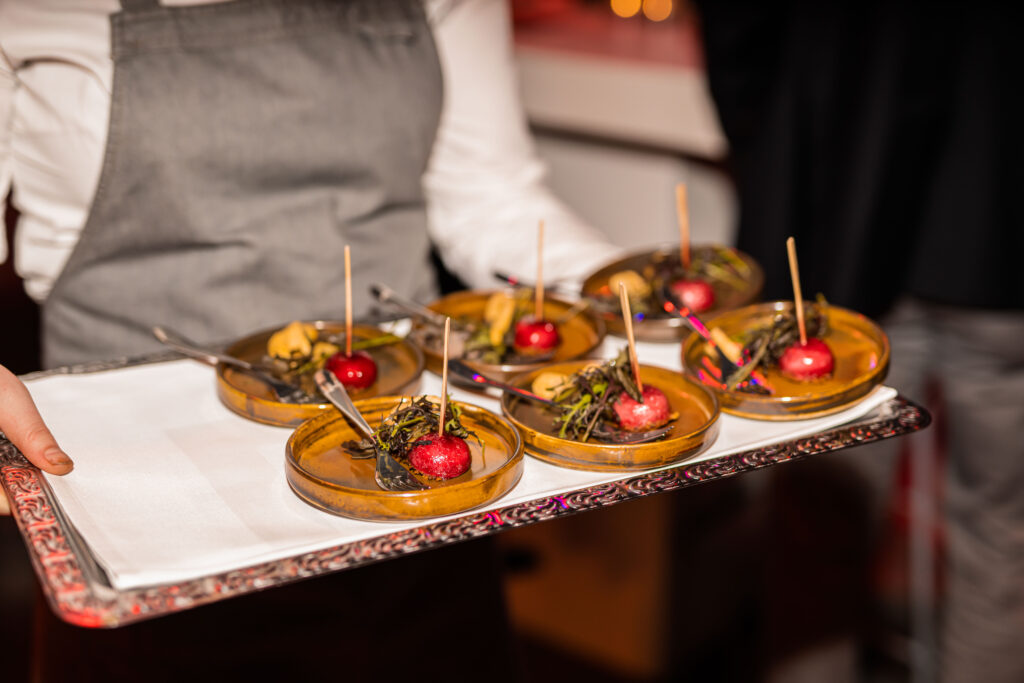 The coffee made by Barista was very tasty but, unfortunately, the location found for him was not good enough, so from time to time the DJ announced at the microphone that we also have coffee. And believe me, after the impressive number of cocktails drunk, coffee was helpful.

There were countless photos taken at X Plane by one of the hostesses, photos that were printed on the spot but were also sent by e-mail to the subjects of the picture. Of course, I also had aviation props, as you can see from the pictures. 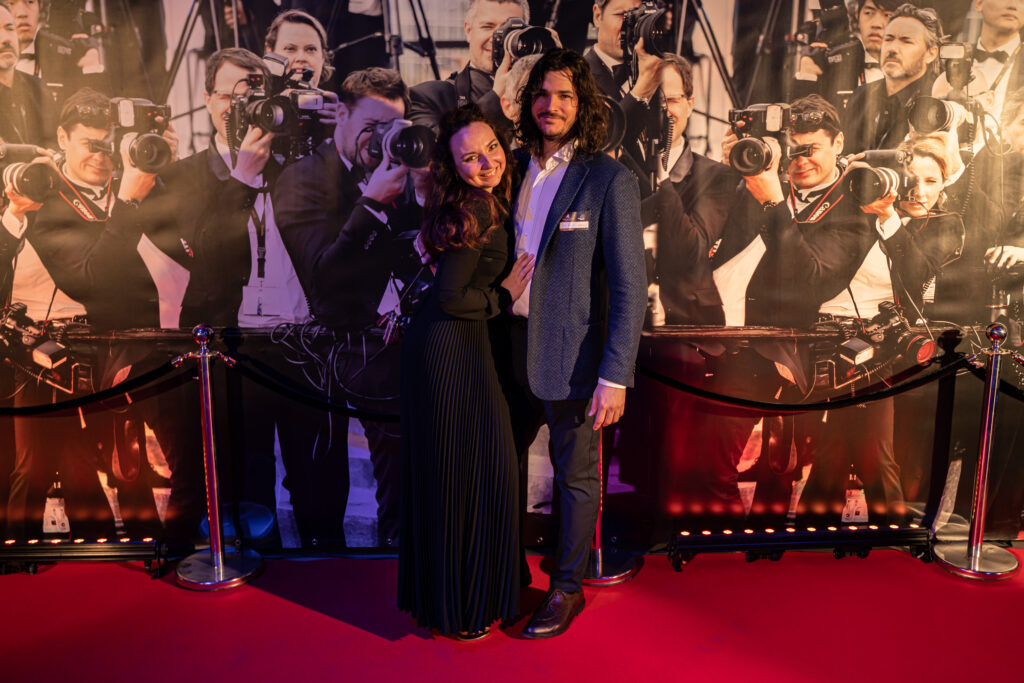 The white furniture was very elegant; we had sofas, lounges and high bar tables. They got the colour of gorgeous tulip arrangements.

Upon departure, each guest received a goodie bag made of material that included: 4 small bottles with different brands of alcohol (enough to be carried in hand luggage, on a plane), a phone charging cable, stroppwafel (specific sweets Holland), a key chain with a Dutch clog and the usual diary and pen.

In attendance, we had almost 250 people from the Netherlands, England, Italy, Germany, France, Japan, America, Ireland, Canada, Romania, Belgium, Abu Dhabi, Colombia and many others, who attended one last party in the industry before the Corona crisis, which left the participants with a pleasant memory of an evening they will not easily forget. 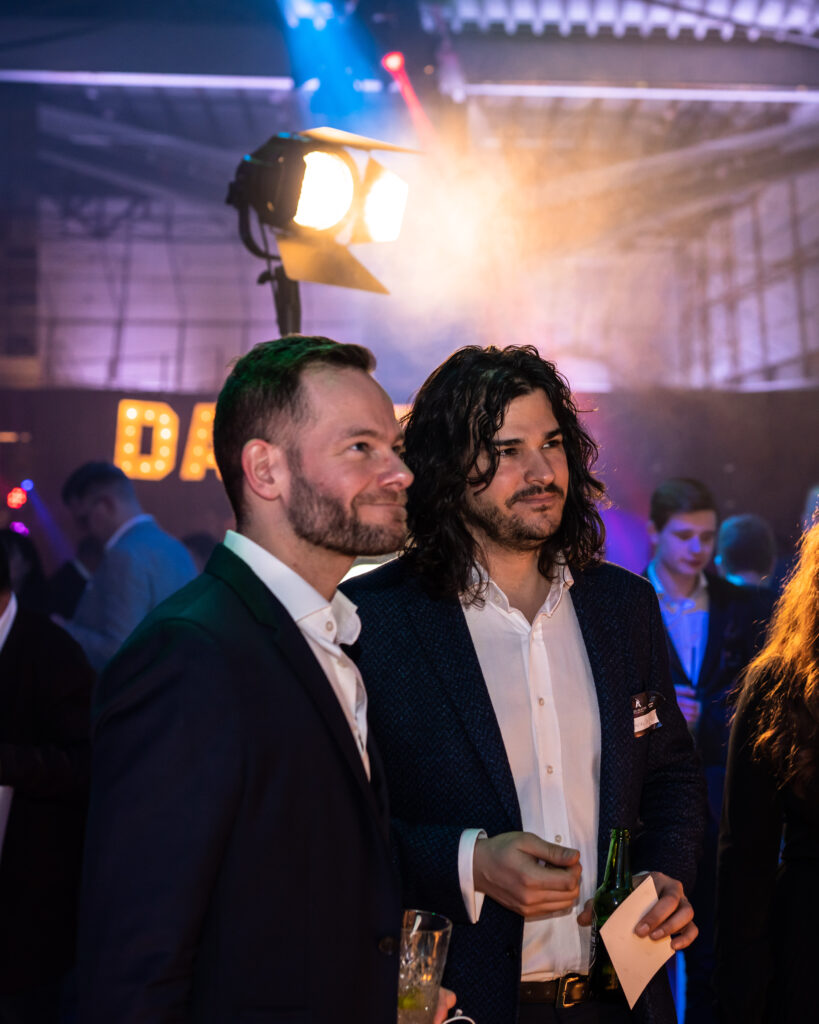 Certainly not everything was perfect and only we know how many things were discussed behind closed doors (i.e. behind the black curtains) but overall it was a very successful event, which I am proud to have had the opportunity to organize together with the other colleagues in the team (especially with Suus). And that, as our guests have told us, must become an annual tradition.