I like both wines and Champagne that are very dry; I don’t like sweet drinks at all. I say this because this aspect must be taken into account when reading this article.

Living in Luxembourg, getting to the Champagne region meant just driving for about two hours.

So the first weekend getaway I went on with Daniel was—yes, you guessed it—Champagne. And I went once again, last year. I’m sure we’ll go again. Although it’s much farther from Amsterdam.

The Champagne region is located about 160 km from Paris and is divided into five regions: Aube, Côte des Blancs, Côte de Sézanne, Montagne de Reims and Valée de la Marne. The cities of Reims and Épernay are the commercial centers of the area. 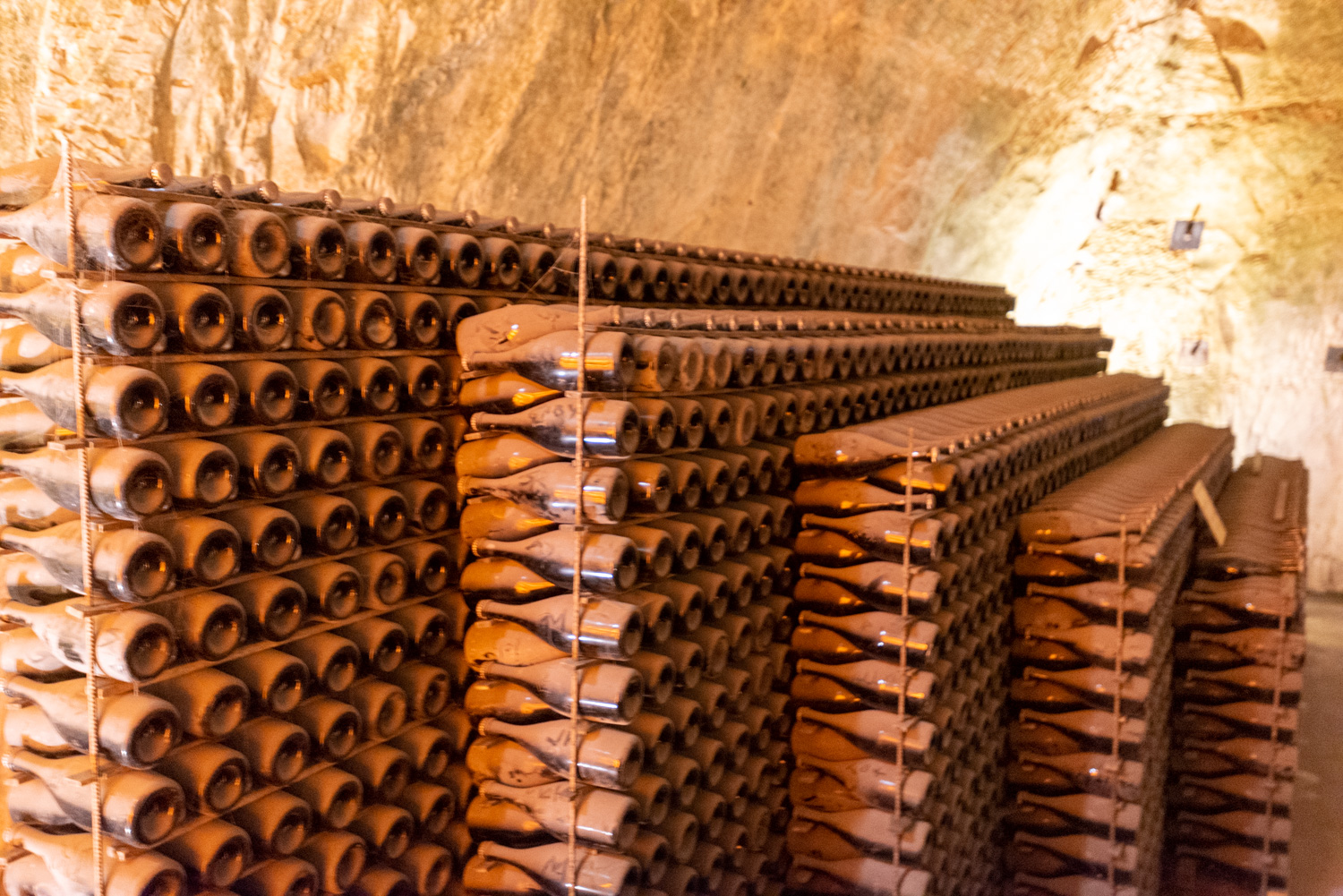 Getting back to Champagne, the most important types of grapes in the area are chardonnay, pinot noir and pinot meunier.

On the first trip we chose to spend Friday night in Reims. Reims is the most popular city in the region, where large Champagne houses such as Veuve Clicquot, Ruinart, Bollinger, Mumm, Pommery are located. Basically most of my favourite Champagnes.

What is very important to remember is that in order to visit the desired wineries, you must make a reservation a few months in advance. Otherwise, most likely, you will not be able to do even a tasting.

We visited Veuve Clicquot for the first time, having booked the 10 a.m. tour. It was on my bucker list for a very long time and it is my favourite house. What I really liked is that you can taste vintage Grande Dame, which is wonderful. And don’t forget that the whole visit is underground, so get well dressed! 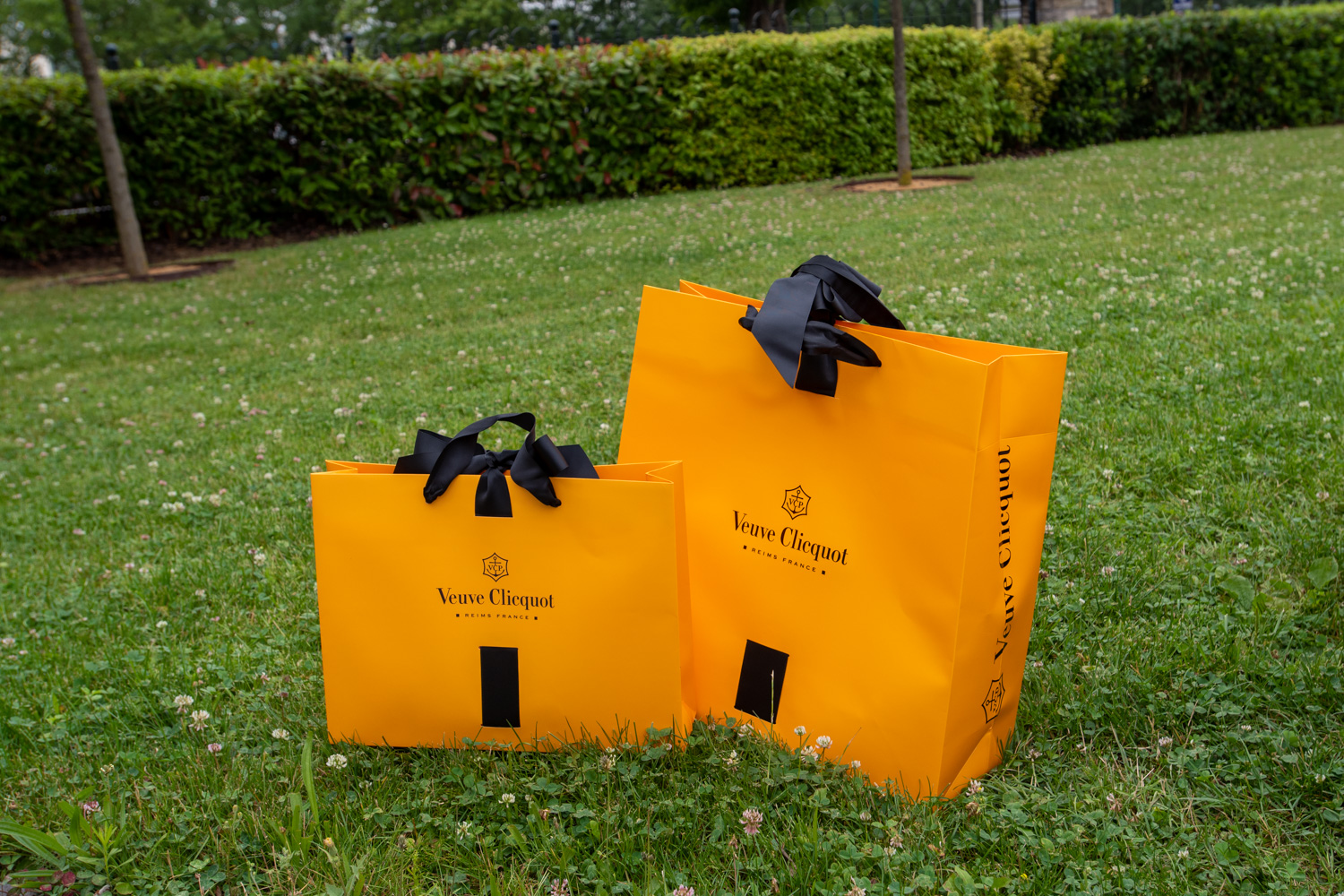 Then we went to have lunch at a boutique hotel called Domaine Les Crayères. It is a short walk from Veuve Clicquot.

I really like the chateaux, the 19th century or early 20th century locations where I imagine how the ladies walked with their crinoline dresses.

The estate was built in 1902-1904 for the Pommery family. Pommery is another great Champagne house in the area, which we visited (the second time we were in the area) and which, I must admit, left a negative impression on us. I don’t like their Champagne at all and the tour was essentially a visit to see some pieces of modern art that were not at all attractive. But, as you well know, the taste of Champagne is very subjective, so maybe you will like it.

Returning to Les Crayères, here you can choose from 600 Champagnes (which is impressive) and you can enjoy the food of the famous Chef Philippe Mille. He makes the gourmet restaurant with two Michelin stars proud. I’m not the biggest fan of French cuisine, but I must admit that the menus were very good. 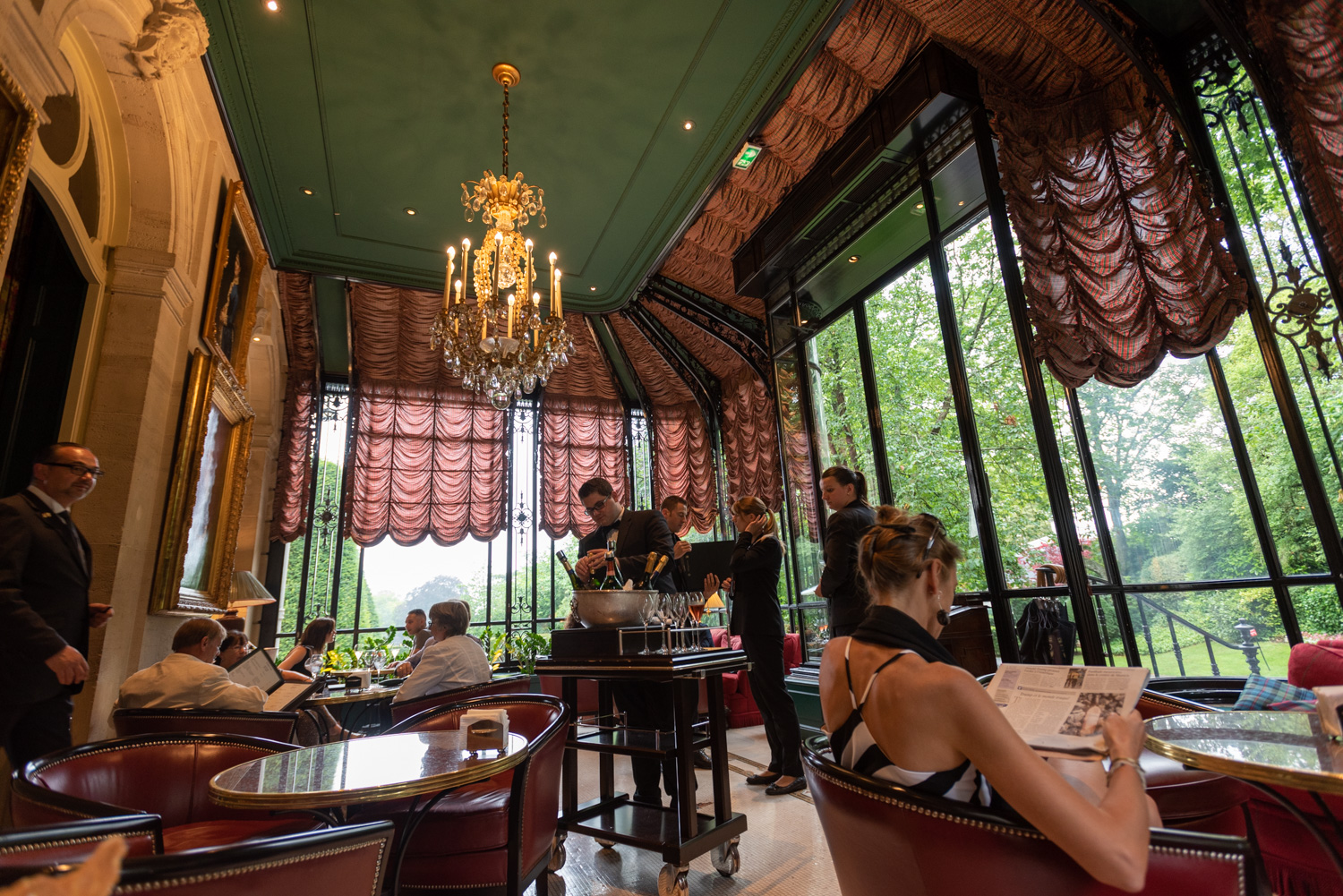 Then we went to visit the cathedral of Reims, Notre-Dame de Reims. It is the traditional location where all the kings of France were blessed with the coronation. It is built in French Gothic style. Construction began in the 13th century and was completed in the 15th century. At one of the entrances, you can see the statue of the Rising Angel. As far as is known, he is the only angelic figure made in this situation. The Cathedral is very beautiful and it is worth reserving a few hours for it.

You can’t pass through Reims without visiting the site of the first signing of the German capitulation at the end of the Second World War (the night of May 7, 1945).

When we finished the visit, we left for our second destination in the area, called Mareuil-sur-Ay. Daniel knows I like everything that smells like the last century, so he found the Guy Charbaut Champagne house. Here you can stay in one of the beautiful rooms with parquet and white furniture, blankets and beige curtains with pink flowers and retro decorations bought from antique markets. Each room is different and ours awaited us with a beautiful view of the canal in the area and a cold champagne on the old wooden table. 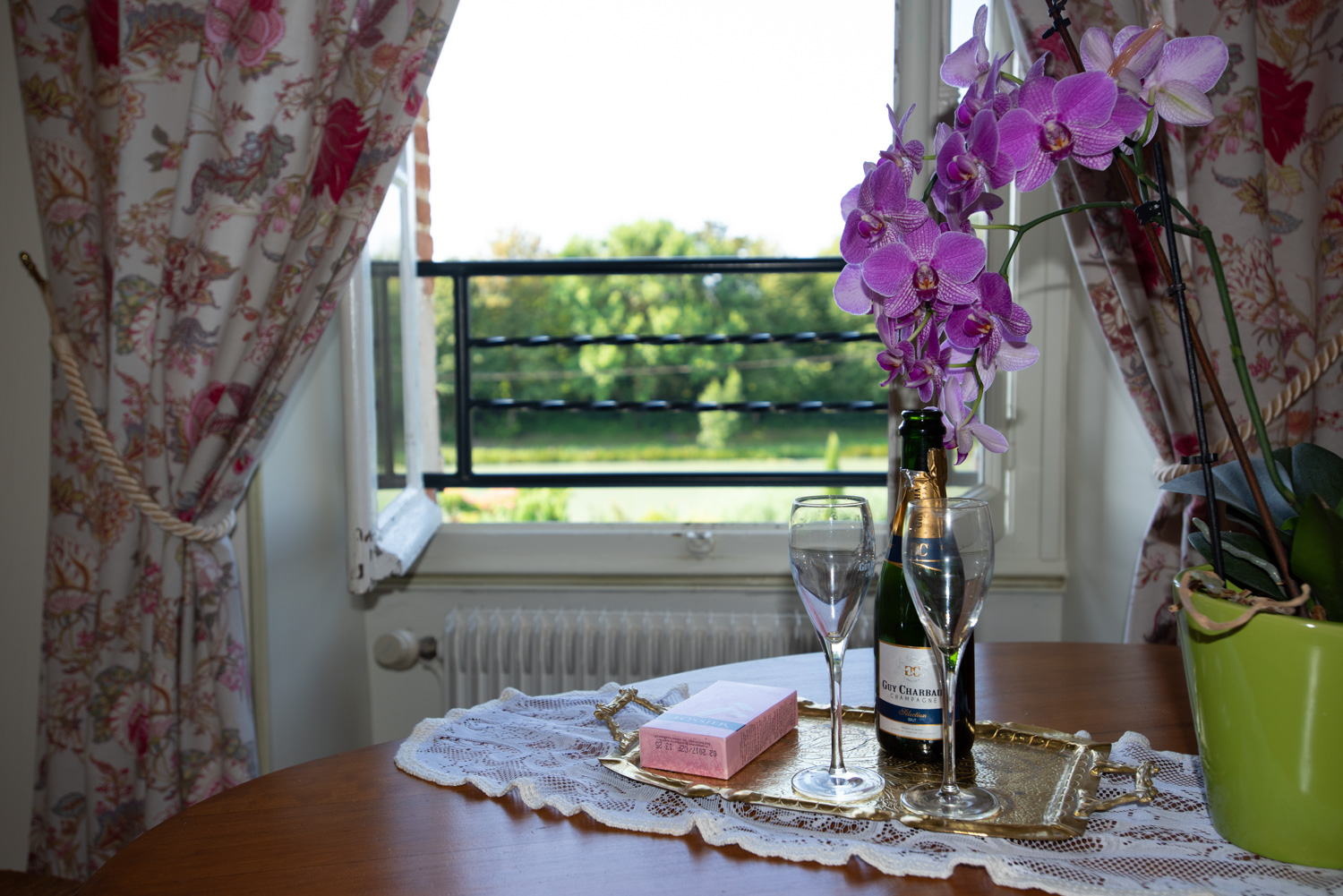 We also had dinner here, reserved in advance that included the tasting of five kinds of Champagne. It was a nice evening, I sat at the table with six Frenchmen and two Germans. Among the French was the couple that  owned the establishment. Daniel talked more with them; I was paying attention to what the host was telling us about how they take care of the cultivation. And how their Champagne comes out so good.

I really liked the rosé Champagne, which was the delicacy of the evening. The food was authentically French, home-made but not memorable. But the experience was very pleasant.

The next day we went to see Dom Pérignon’s tomb in Hautvillers. It is located in a small, authentic French village cathedral, a cathedral where the monk served as a cellarer for the second half of his life. It is said that Dom Pierre Pérignon was the one who took considerable steps to invent Champagne at a time when the area was used predominantly for red wines. But he was not the one to whom the invention of sparkling wine is attributed; this kind of drink appearing much later, some time in the middle of the 19th century. 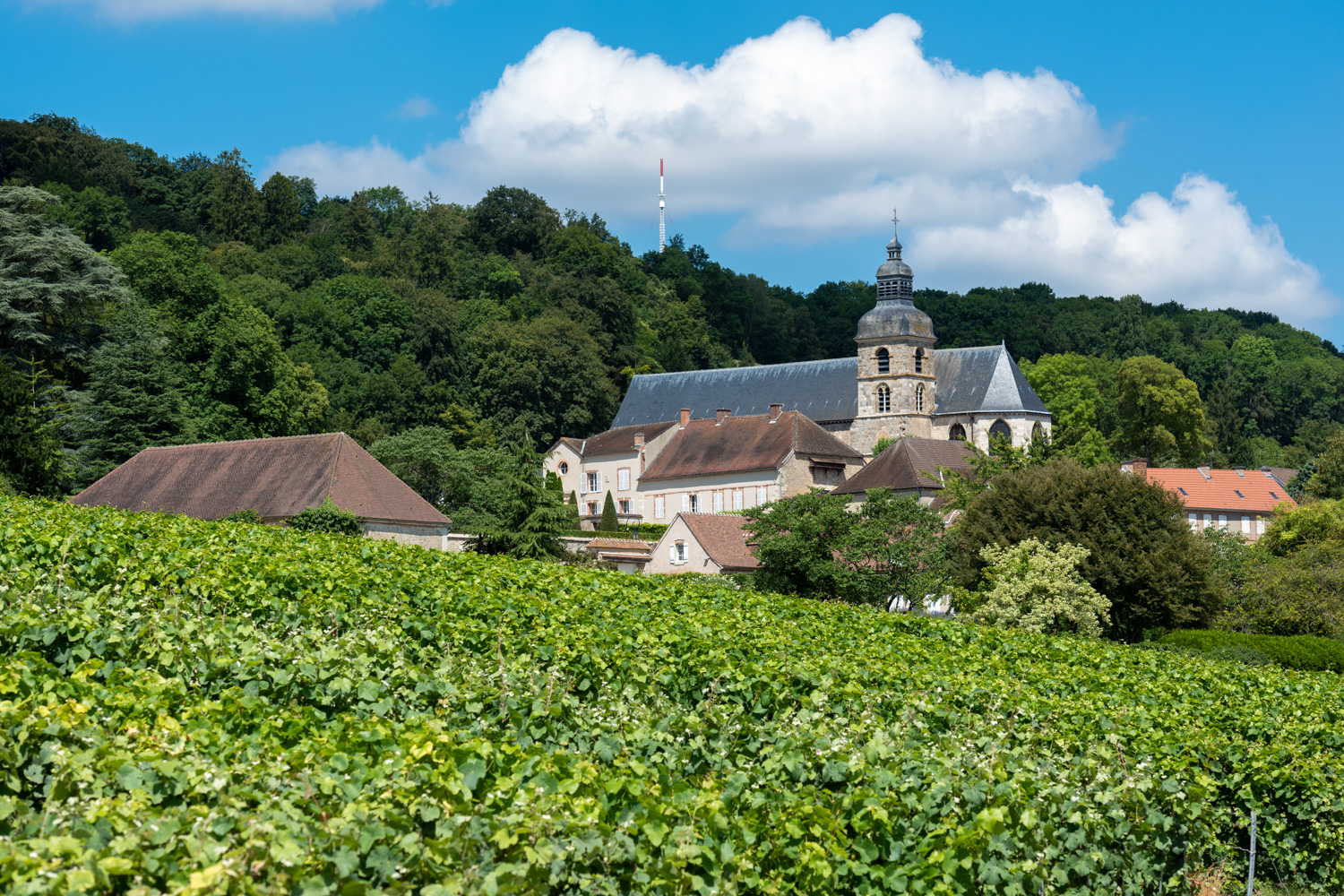 Going further, we went to visit a new Champagne house. We preferred to go to smaller, niche producers, which we may not have heard of until then. We suspected that we would find various “diamonds” of the drink of the gods (even if it was sparkling). 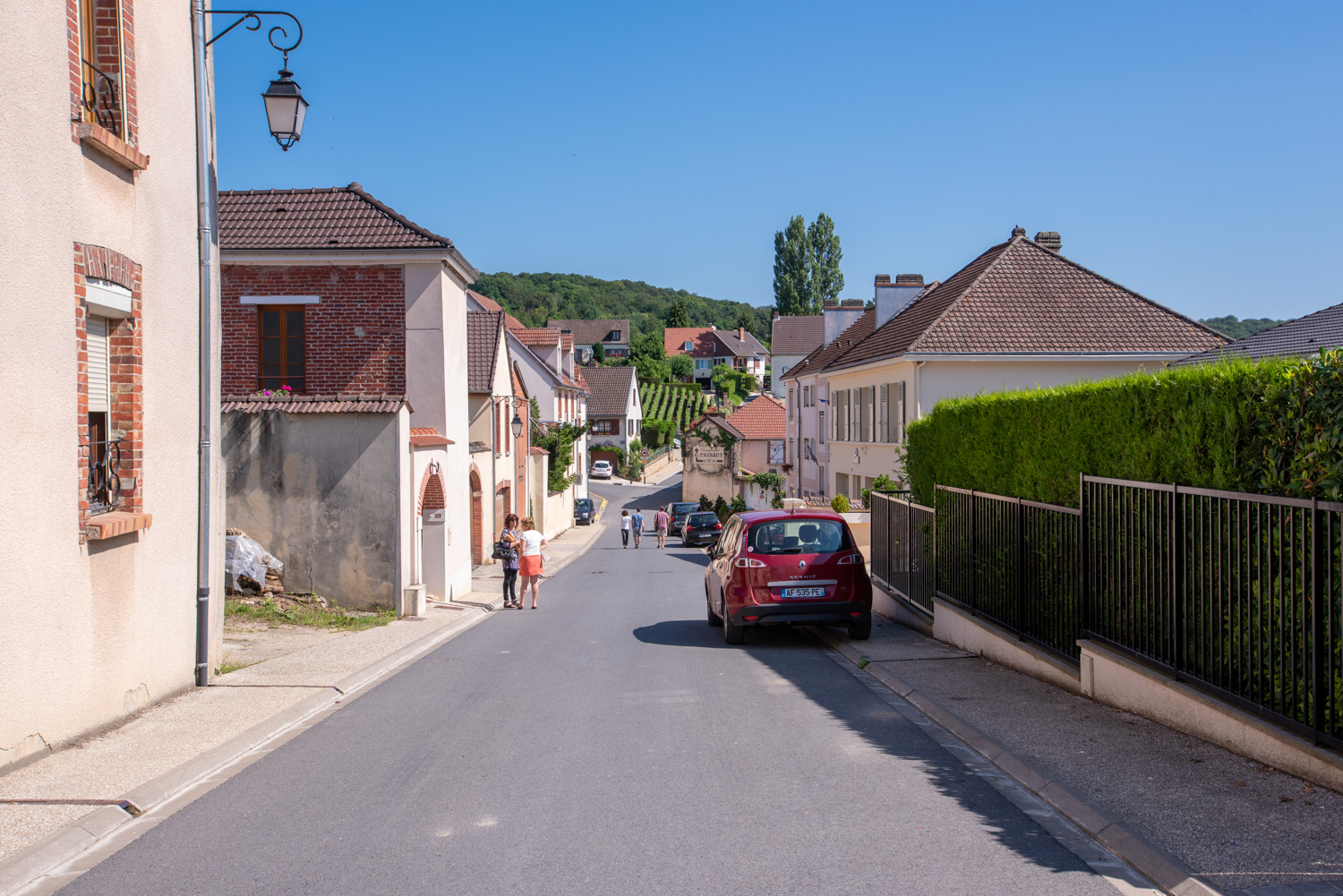 That’s how we got to G. Tribaut, also in Hautvillers. I really liked the atmosphere, the Champagne (I also bought six bottles), and the conversation with the sommelier.

And I have another memory from there. With us, at the small oval table, sat a cat. A big, tabby cat that was sleeping on a chair when we arrived and didn’t bother to leave when we sat down. But when the three glasses for tasting came, she got up and stared at us, as if watching us every step and waiting to see our reaction. She was probably curious if we liked Champagne or not. I, who love cats, tried to caress her. But she was very upset by this gesture. As such, she stuck a single claw in my finger, leaving a crater.

So if you arrive at G. Tribaut, taste (and buy) Champagne, admire the cat and leave without attempting to pet the cat. 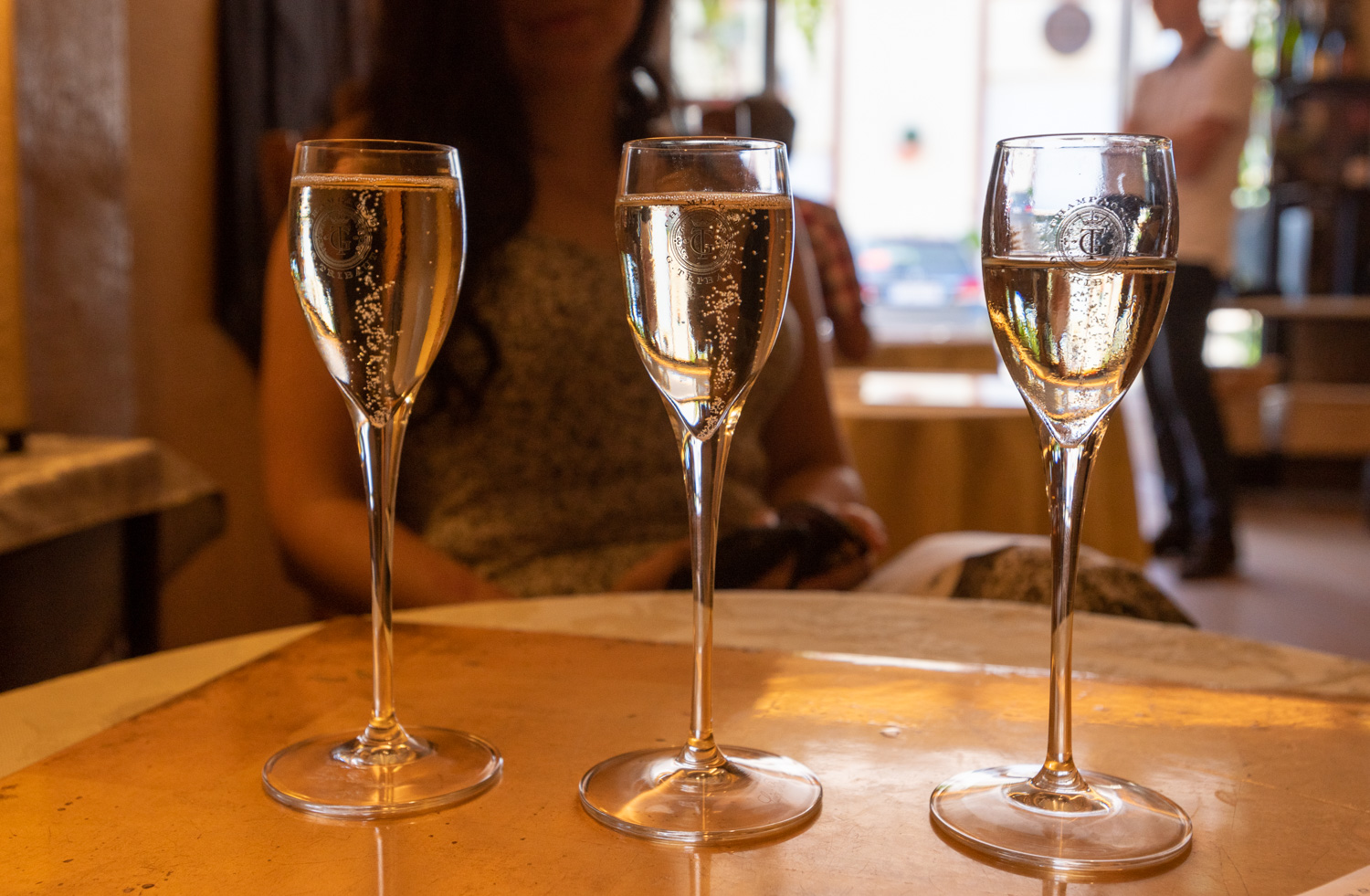 After walking through the beautiful streets of Hautvillers, among the vines and about 2000 photos (taken by Daniel, of course), we went to Epernay. 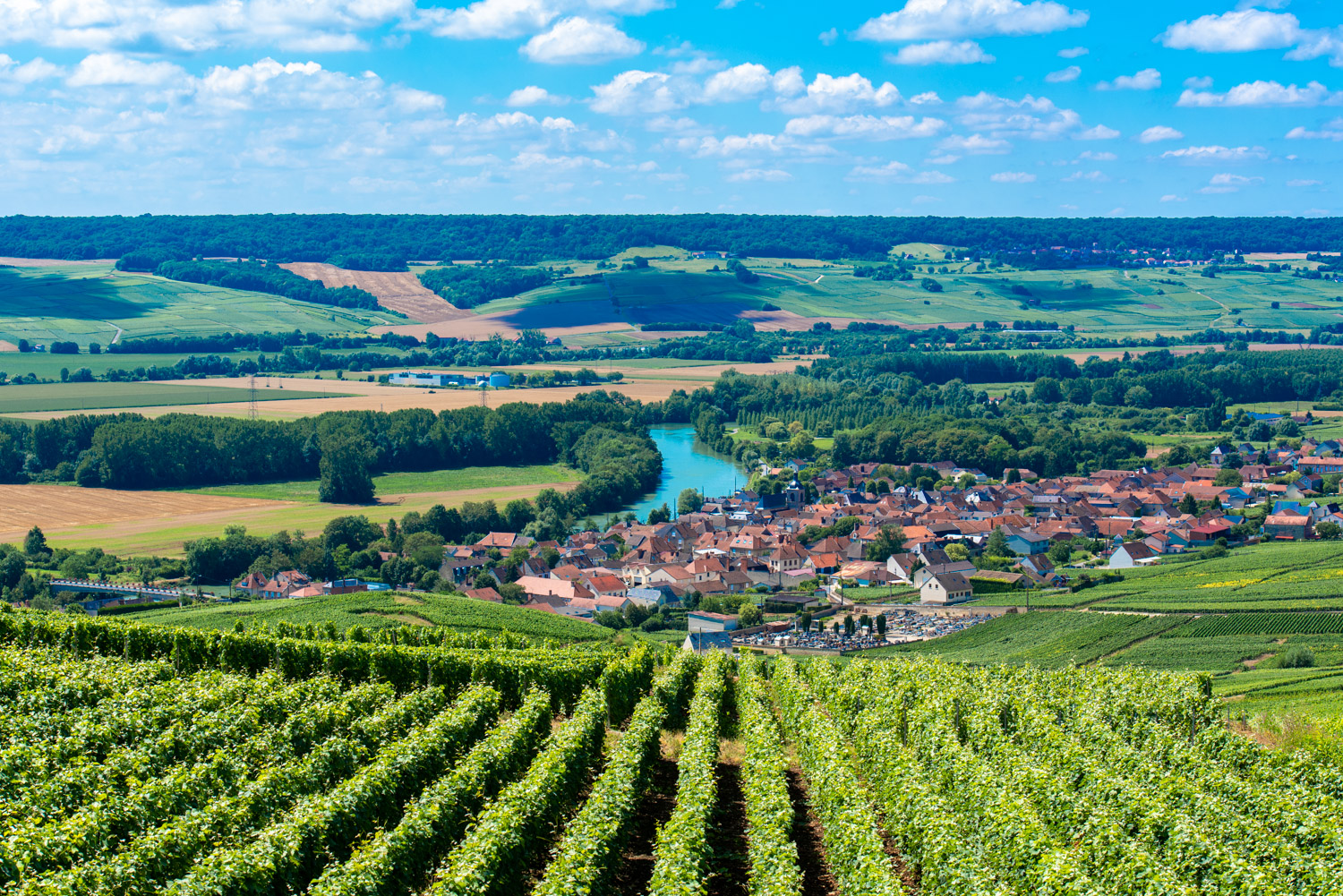 In Épernay you can find for 300 houses of Champagne (yes, I know, for a town just under 23 km2, it’s impressive). Most of them are on Avenue de Champagne. When I got to that boulevard, I felt like I was floating on a river of Champagne. And no, it wasn’t from tastings. But from the magnitude of this industry so beautifully developed, of a drink that is associated with celebration, happiness, and goodwill. 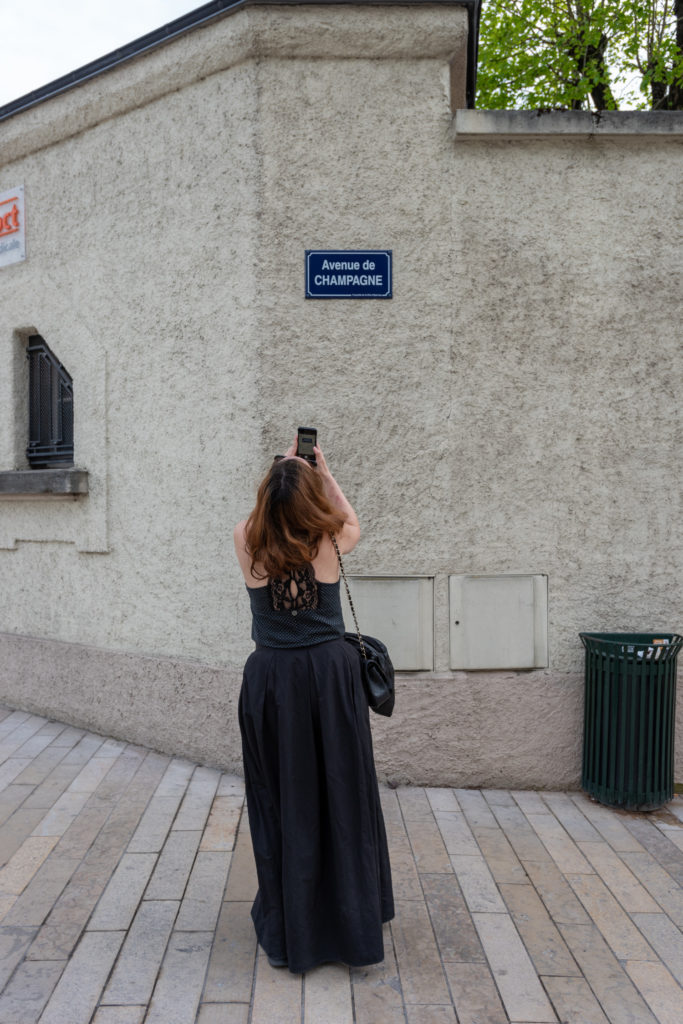 We visited Moët & Chandon for a while (Dom Perignon is also still there) and then we took to the boulevard on foot, looking at each courtyard where there was another establishment. One after another. Hundreds…

And we stopped at Collard-Picard. I wanted to stop here because there were only a few tables where you could taste and all but one were occupied by a few very elegant French families. I think they were celebrating something because they were dressed chic, fine. You know what that means to the real French… I later discovered that they had been invited here by the patriarch of the empire.

I really liked that hour when we exchanged a few words with the elegant families and they recommended us what Champagnes to taste.

But as we were supposed to drive, we couldn’t drink very much, so we bought two bottles (we still have one) of Premier Cru Rosé. Very good!

That night I also slept at Guy Charbout’s and the next day after breakfast, I went to Reims for one last walk and lunch.

I had chosen a restaurant with a vintage flavour. It is a seafood brasserie. It’s called Excelsior. The service was very good (which is not often the case in France) and the seafood as well.

We had booked a meal on the terrace and we did well. It is a very popular restaurant so if you want to go there, Don’t forget to make a reservation. 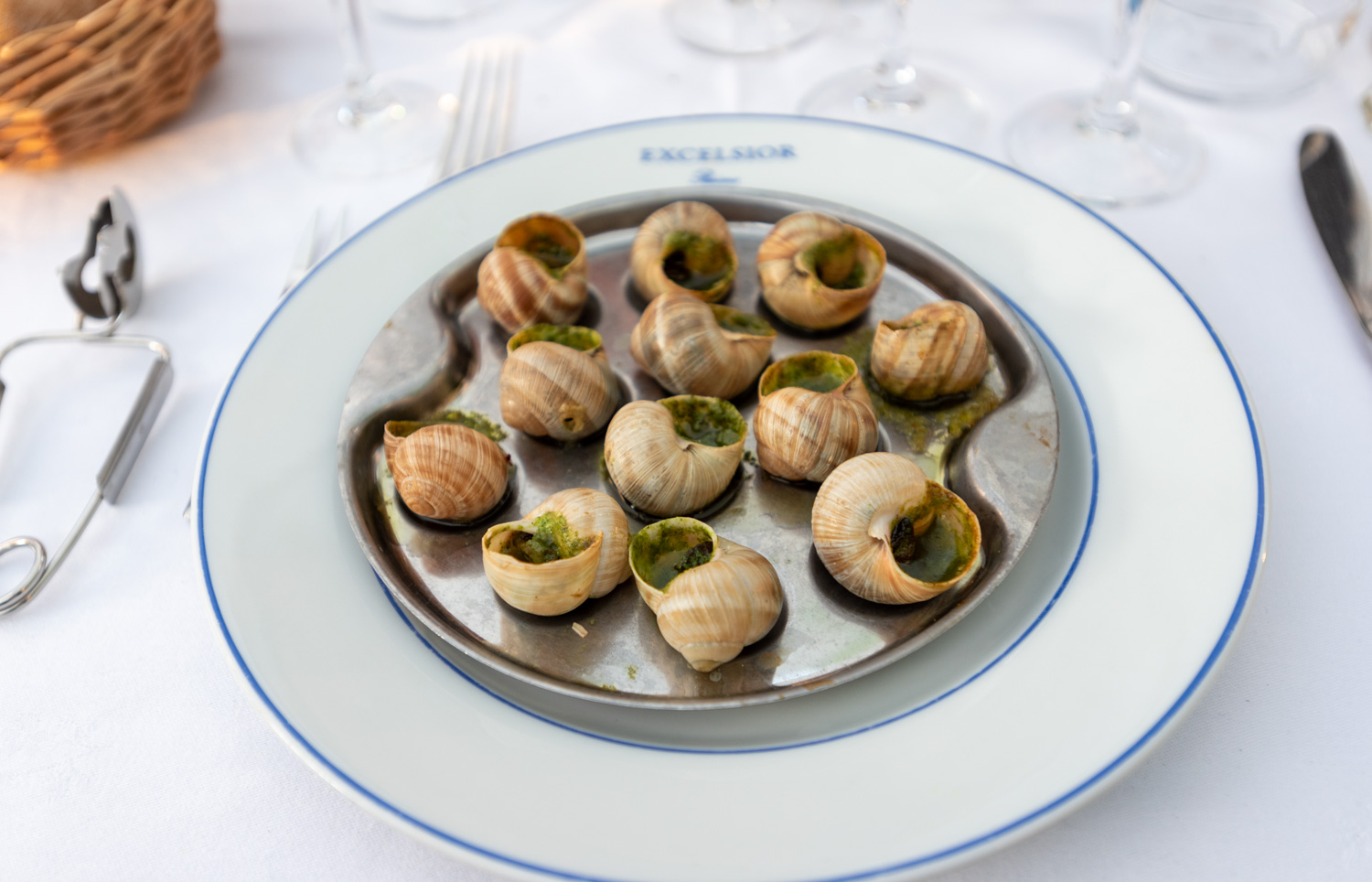 In conclusion, if you like Champagne then a trip to Champagne is definitely for you. Actually, even if you don’t like it, if you visit the region, you will definitely learn to appreciate it. And the landscapes with vineyards, with French villages, with churches and monasteries with exterior stone walls, visits to wineries, will make you want to come back. We definitely will!

2 thoughts on “Stories about Champagne from Champagne”